Twitter stock completed the rally outlined on Oct. 2 in Twitter (TWTR) at Cusp of Major Breakout during Wednesday's session, while Pinterest added to a long series of new highs. That leaves Facebook, which topped out in August and entered an intermediate downturn. Unfortunately for bulls, the platform continues to attract unwelcome attention during the presidential race, with complaints of anti-conservative bias from members of Congress. In addition, foreign powers are once again hard at work, attempting to persuade public opinion through bots and fake news.

Wall Street consensus is steadfastly bullish on Facebook despite the controversies, with a "Strong Buy" rating based upon 32 "Buy," 3 "Hold," and just 1 "Sell" recommendation. Price targets currently range from a low of $195 to a Street-high $335, while the stock is set to open Thursday's session more than $20 below the median $300 target. Political headwinds are obviously contributing to this placement, with strong odds that they'll evaporate between November and January.

A consensus estimate is a forecast of a company's projected earnings based on the combined estimates of equity analysts covering a public company. Generally, analysts give a consensus for a company's forecasted earnings per share (EPS) and revenue numbers; these figures are most often made for the quarter, fiscal year, and next fiscal year.

A multi-year uptrend topped out at $218.62 in July 2018, ahead of a deep slide that posted a two-year low in the $120s at year end. A two-legged recovery completed a round trip into the prior high in January 2020, ahead of a pandemic-driven decline that carved a higher low in the $130s in March. The stock completed a bounce into the prior peak in May and broke out, testing new support for more than two months before ejecting into a rally that hit an all-time high at $304.67 in August.

Aggressive sellers took control into September, dropping the stock through the 50-day exponential moving average (EMA) before remounting that level near the month's end. Price action stuck like glue to the trading floor until Wednesday, when it took off and rallied to a seven-week high. The on-balance volume (OBV) accumulation-distribution indicator has also turned the corner after a brief distribution phase, adding a measure of support to the uptick.

However, Bollinger Bands® highlight hidden resistance that is already coming into play. A one-day uptick reversed at the barrier earlier this month, and a similar turnaround could unfold after this week's buying surge. In addition, the rally stalled at the .618 Fibonacci selloff retracement level, predicting limited upside into next week's earnings report. Relative strength readings follow this mixed theme, with a monthly sell cycle competing with a weekly buy cycle.

Taken together, Facebook could test the summer high after a strong report, but a sustained uptrend will be a tough chore, especially with the presidential election just five days after the release. As a result, it makes sense to stick with Twitter and Pinterest for now because they've already overcome the forces of gravity and political intrigue. Even so, the "F" in the legendary FAANG quartet is likely to post new highs prior to year end.

Twitter (TWTR) Gains as JPMorgan Calls It a 'Top Pick' 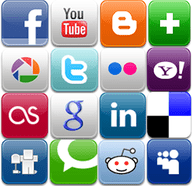 Social Media Stocks Could Be Poised to Head Higher
Partner Links
Related Terms
What Is Social Networking?
Social networking is the use of internet-based social media platforms to make connections and share various media with friends, family, colleagues, or customers.
more
Rebound
A rebound refers to a recovery from prior negative economic or financial activity. For a security, a rebound means that it has moved higher from a lower price.
more
Who Is Michael Bloomberg?
Michael Bloomberg is a billionaire businessman, publisher, and philanthropist, and a former mayor of New York City.
more
What Are Meme Stocks, and Are They Real Investments?
Meme stocks describe the shares of companies that have gained a cult-like following on social media, which can influence share prices.
more
Who Is Mark Zuckerberg?
Mark Zuckerberg is a self-made billionaire and the CEO of Meta (formerly Facebook), which he co-founded in his dorm room in 2004.
more
Accountability: Definition, Types, Benefits, and Example
Accountability is the acceptance of responsibility towards other parties. Read about corporate, government, and political accountability.
more
Dialog Heading