The Southwest Rapid Rewards Plus credit card is the least expensive of the three co-branded credit cards offered by the airline, which perennially scores very high in customer satisfaction. With its relatively low $69 annual fee and relatively rich rewards, this might be the best value among the trio of Southwest cards, provided you’re comfortable with a card that offers few if any luxury travel benefits. 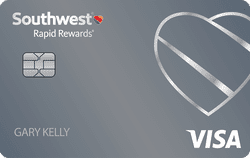 The least expensive of the airline's three co-branded credit cards, the Southwest Rapid Rewards Plus is for Southwest customers who want to pay less for a card, and are prepared to get less from it as well.

After a first-year fee of $69, the cost of the card in subsequent years is a little easier to bear, thanks to the value of the card's 3,000-point anniversary bonus. That’s less than the bonuses with the other Southwest cards, at least one of which offers more travel perks as well.

This card, though, better suits those who may not wish or need to pay more upfront for a card, especially if they're unsure as to when they'll redeem points for flights, and to where. Southwest flies to fewer countries than other major U.S. airlines. Its routes are primarily within the U.S. Mexico, Central America, and the Caribbean, and using points with its global partners yields much less value per point than if you redeem directly with Southwest.

The card offers 65,000 bonus points after you spend $2,000 in the first three months until July 14, 2021. By our calculations, that bonus would deliver an average value of $975 when redeemed for flights on Southwest.

To earn that bonus, you'll need to spend about $667 dollars per month for three months.

In addition to the card's bonus, you’ll earn 2 points per dollar on Southwest Airlines purchases and 1 point per dollar everywhere else.

While getting just 1 point per dollar on most of your purchases doesn’t sound appealing, remember that the effective rewards rate is nearly 1.45% due to the average value of Southwest points. That makes the card competitive with those that offer the same percentage in cash back or the same number of points per dollar spent on other airlines that have a lower value for each point.

There are no limits on the number of points you can earn. Each year, members can earn 3,000 anniversary bonus points. You can also earn 10,000 points for each person you refer to a Chase Southwest Rapid Rewards credit card. That bonus is good for up to 5 referrals per year or 50,000 points.

The most obvious way to redeem points earned with this card is for flights aboard Southwest. The number of points needed to redeem depends on the fare. The points required for particular flights vary, even for the same or similar flights, just as the money prices for flights vary over time and based on demand. There are no blackout dates for using rewards.

Besides Southwest airfare, you can also redeem rewards for:

Again, the number of points you need to redeem and their associated value depends on the redemption option.

It goes without saying, but the more you use your credit card, the more points you'll earn. And using the card for all Southwest purchases is an obvious priority, given the favorable mileage those transactions receive.

Then there's the need to get the most air travel for your points by shopping for the least points for the most favorable flights. The number of points you need to book a flight can vary based on a number of factors, including the destination, time, travel dates, demand, fare class, point redemption rate and more. Ideally, to get the best deal you must check frequently with the airline early and often, to check on the availability of flights and their cost in points.

Also, by our calculations, redeeming points with Southwest, rather than with one of the carrier's international partners, yields the best bang for your buck.

Be sure, too, that you've signed up for Southwest's mailing list to get notifications when it runs fare deals. To get on the list, click on "Special Offers" at the top of any page on the airline’s website and click the "Sign up and save" button. With Southwest, unlike some other airlines, the redemption amount for flights goes up and down in step with changes to their cash price, so by shopping the sales you can save points on a particular flight as readily as you can save money.

Also unlike some other airlines, Southwest Airlines customers—and not only elite ones—can cancel award tickets without penalty. So after you book your flight, check back now and then to see if the price has dropped. If it has, you can cancel, get your points back, then rebook the same flight for less.

Another way to rack up Rapid Rewards points quickly is to refer friends and family members to apply for the card. You’ll receive 10,000 bonus points for each friend or business that gets approved for a qualifying Southwest credit card. You can earn up to 50,000 points this way each year.

Chase, which issues the Southwest co-branded cards, ranks fourth out of 11 in the J.D. Power 2020 U.S. Credit Card Satisfaction Study. Chase's score was just below average.﻿﻿

The bank provides free access to your VantageScore credit score through its Credit Journey program, but you can sign up at no charge for that score even if you don't have a Chase credit card. Also, keep in mind that many major card issuers provide free access to your FICO credit score, which is more likely to be used by lenders.

Chase offers 24/7 customer service via phone, which is standard for the credit card industry. You can also send a secure message through your online account if the matter isn’t urgent. For general account management, you can use the Chase mobile app.

As a Chase cardholder, you can lock your account through the bank's mobile app, which can come in handy if the card has been lost or stolen. You can then unlock it if you recover the card. Chase isn’t the only card issuer that offers this feature, but it's not standard.

The card also has the ability to make contactless payments. This means that instead of swiping or inserting your card, you simply tap it to a contactless card reader. This checkout experience is faster than the other two options, and it still provides the same level of security as your card's chip.

Hidden Fees to Watch Out For

The Southwest Rapid Rewards Plus card has a 3% foreign transaction fee. In most cases, travel credit cards don’t charge this fee on international purchases. So if you’re planning an overseas trip, consider taking a different travel card.

As the most modest of the carrier's three co-branded credit cards, the Southwest Rapid Rewards Plus credit card allows you to earn valuable rewards on Southwest Airlines without paying a steep annual fee.

It's a notably lean card when it comes to travel perks, however. If you’re prepared to pay more, if only upfront, to get more from a Southwest card, consider the Southwest Rapid Rewards Priority credit card. It costs $149 a year, but offers four upgraded boardings per year, a 7,500-point anniversary bonus and a $75 annual Southwest travel credit. Those last two items could justify the annual fee, since the anniversary bonus alone is worth $108.75 when used to buy flights. You would need to be fine, though, in paying a $149 fee for a year, compared with a fee of less than half as much for the Southwest Rapid Rewards Plus.

As with any airline credit card, too, consider the potential drawbacks of having less flexibility with your rewards. With the Chase Sapphire Preferred, for instance, you can redeem your points directly with Chase or transfer them to several hotel and airline loyalty programs, including Southwest Rapid Rewards.

Next Steps
For Southwest Rapid Rewards® Plus Credit Card
on Chase's Secured Site.
Compare This Card
See how this card compares to similar cards
CURRENT CARD
Southwest Rapid Rewards® Plus Credit Card
overall rating
3.3
Next Steps
Recommended Credit
Score Our recommended ranges are based off of the FICO® Score 8 credit-scoring model. Credit score is one of the many factors lenders review in considering your application.
350 579
580 669
670 739
740 799
800 850
Good - Excellent
Investopedia Credit Card Rating Methodology
Investopedia is committed to delivering the best credit card recommendations in the industry. We’ll tell you when a card is good, we’ll tell you when a card is bad, and we’ll only call a card the best if we would recommend it to our friends or family members.
Overall Star Rating Explained
To rate credit cards we objectively assess, score and weight nearly 100 individual card features which roll up into five major feature sets: fees, interest, rewards, benefits and security/customer service. Here’s how we weighted those feature sets for the overall star rating of a card:
We have applied our proprietary rating methodology to every generally-accepted credit card in the U.S. domestic market to allow consumers to make fully informed choices. It’s important to note that for our overall score that we make a number of assumptions about how you would be using your credit card: