The Southwest Airlines Rapid Rewards Priority is the top-of-the-line card allied with the airline, which typically scores very well in customer-satisfaction surveys. While the annual fee is $149, on the high side for an airline credit card, its perks and credits more than justify the fee for regular Southwest customers. 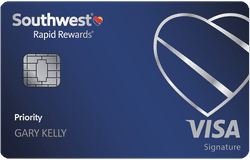 Like all airline cards, the Southwest Airlines Rapid Rewards Priority is aimed exclusively at dedicated customers of its branded airline. If you fly regularly with the airline, you'll get the most from such card benefits as upgraded boarding to secure the airline's best seats, which are typically unassigned.

That said, the card's $149 annual fee is also justified by annual $75 credit and the value of the 7,500 points you get on every renewal anniversary. That makes this card worth considering even if you fly only a few times a year on Southwest.

The Southwest Airlines Rapid Rewards is also helpful if you're looking for a suitable card to take abroad with you. This card charges no foreign-transaction fee, which would be useful to use for purchases on the ground when flying to some of the select few foreign destinations Southwest serves, in Mexico, Central America, and the Caribbean.

As a new cardholder, you'll earn 30,000 bonus points after you spend $5,000 in the first three months. With many other airline credit cards, you can expect to spend $1,000 per month or less for the same three-month period to qualify for the one-time offer. Based on our research, this card's bonus would represent a $435 value when used to buy Southwest flights.

To earn the 2 points per dollar at travel partners, you need to book with them directly or through Southwest.com. If you use your card to book through a third-party site, like Hotels.com or Expedia, you'll earn just 1 point per dollar. All other purchases made with the card earn 1 point per dollar.

While those earnings rates are typical of many airline credit cards, Southwest points are worth more than those of many other airlines, by our estimates. With each point worth about 1.45 cents, the effective rewards with the card are 2.9% for Southwest purchases and 1.45% for everything else.

There are no limits on the number of points you can earn. Each year, members earn 7,500 anniversary bonus points. You can also earn 10,000 points for each person you refer to either of the Southwest Rapid Rewards credit cards, this one or the Southwest Rapid Rewards Visa, card, with its $99 annual fee. The bonus is good for up to 5 referrals per year or 50,000 points.

Several factors go into determining how many points you need to book an award flight, including the destination, time, travel dates, demand, fare class, point redemption rate and more.

Other redemption options include:

You can increase your return on the Southwest Rapid Rewards Premier Visa credit card in multiple ways. The first is to earn the 30,000-point bonus. To do that, you need to spend $5,000, on any purchases, within the first three months after account approval. That earns you 30,000 points, worth $435 when used to buy flights. Plus, you'll also get a Companion Pass.

If you didn't book your ticket during a fare sale, no problem. Southwest offers free cancellations on award tickets, so check now and then to see if the price has dropped. If it has, you simply cancel your flight and book it again to save the difference.

Another way to earn points with the card is to refer your friends and family members. You'll receive 10,000 bonus points for each friend or business you refer that applies and gets approved for a qualifying Southwest credit card. You can earn up to 50,000 points each year through referrals.

The bank does not offer complimentary access to your FICO credit score, which is what most major lenders use for credit decisions and is the standard among most national credit card issuers. Instead, it offers free access to your VantageScore credit score through its Credit Journey program, whether you have a Chase card or not.

Chase provides 24/7 customer service via phone, which is typical among major credit card issuers. You can also send a secure message through your online account, but there’s no option to communicate with a representative through the Chase mobile app.

If you lose your card or it’s been stolen, Chase allows you to lock the card through your mobile app. If you find the card again, you can also unlock it, so it’s ready for use. This feature isn’t unique to Chase, but not all major card issuers provide it.

The Southwest Rapid Rewards Priority Credit Card is also contactless, which means that you can just tap your card to a contactless reader to pay—no swiping or inserting is required. The tap-and-pay checkout experience is faster than using the EMV chip and provides the same level of security.

Despite its $149 annual fee, the Southwest Rapid Rewards Priority Credit Card can be well worth it if you fly Southwest even a couple of times per year. The Southwest annual travel credit of $75 and the anniversary bonus, worth $109 by our calculations, can also help justify the annual fee.

If you often travel with a sidekick and have a small business, pairing the card with a Southwest business credit card could allow you to earn the Companion Pass, at least for the introductory year with both cards. The pass gives you a free ticket (plus taxes and fees) every time you fly with your designated plus-one for at least a full year.

Combining the Southwest Rapid Rewards Priority Credit Card, and its 30,000-point bonus, with the Southwest Rapid Rewards Performance Business Credit Card, which offers 70,000 bonus points after you spend $5,000 in the first three months, will get you most of the way to enough points to earn the coveted companion pass, which requires 125,000 points to be earned during the calendar year.

Remember, though, that there are some restrictions with the card. As with any airline credit card, your valuable redemption options are limited. If you want more flexibility, consider a card like the Chase Sapphire Preferred, which allows you to book just about any type of travel through Chase or transfer your points to airline or hotel partners, including Southwest.

Apply Now
For Southwest Rapid Rewards® Priority Credit Card
on Chase's Secured Site.
Compare This Card
See how this card compares to similar cards
CURRENT CARD
Southwest Rapid Rewards® Priority Credit Card
overall rating
3.4
Apply Now
Recommended Credit
Score Our recommended ranges are based off of the FICO® Score 8 credit-scoring model. Credit score is one of the many factors lenders review in considering your application.
350 579
580 669
670 739
740 799
800 850
Good - Excellent
Investopedia Credit Card Rating Methodology
Investopedia is committed to delivering the best credit card recommendations in the industry. We’ll tell you when a card is good, we’ll tell you when a card is bad, and we’ll only call a card the best if we would recommend it to our friends or family members.
Overall Star Rating Explained
To rate credit cards we objectively assess, score and weight nearly 100 individual card features which roll up into five major feature sets: fees, interest, rewards, benefits and security/customer service. Here’s how we weighted those feature sets for the overall star rating of a card:
We have applied our proprietary rating methodology to every generally-accepted credit card in the U.S. domestic market to allow consumers to make fully informed choices. It’s important to note that for our overall score that we make a number of assumptions about how you would be using your credit card: