Moet Hennessy Louis Vuitton SE (LVMH) is a Paris-based luxury goods empire. Louis Vuitton is, of course, the French fashion house and luxury goods company. Moët & Chandon is a champagne maker, and Hennessey is a purveyor of cognac. These are just three of the many brands cobbled together by Bernard Arnault over the years.

The wines and spirits segment produces and sells high-quality champagne wines and sparkling wines. It also distributes vodka and white liquor. The fashion and leather goods segment engages in the manufacture of luggage items, bags, accessories, shoes, and clothes. The perfumes and cosmetics segment engages in the production and distribution of make-up, perfume, and skincare products. The watches and jewelry segment manufactures luxury watches and accessories for men and women. The selective retailing segment is organized to promote an environment that is appropriate to the image and status of the luxury brands.

Finally, the other activities and eliminations segment includes its media division, which publishes newspapers and magazines, manages business and financial websites, and holds radio stations.

If you're interested in owning a large-cap luxury firm that's survived, and in fact thrived, during recessionary periods, LVMH could be a great bet. LVMH operates in all five major sectors of the luxury market: wines and spirits; fashion and leather goods; perfumes and cosmetics; watches and jewelry, and selective retailing and other activities and eliminations. Below are three suggestions for how to buy the stock of this French company.

LVMH's over-the-counter share volume is actually quite reasonable, so liquidity isn't as big a concern as other OTC stocks. However, it is also nowhere near the 1.5 million shares traded daily on the Paris Exchange, LVMH's home base.

American depository receipts (ADRs) offer U.S. investors a means to gain investment exposure to non-US stocks without the complexities of dealing in foreign stock markets. If you employ an investment manager with a global presence, they can probably buy the European shares for you. Otherwise, your only option to get direct access to these shares is OTC.

﻿Investors looking to buy a mix of luxury stocks, like LVMH, Hermes, PPR and Richemont Group may want to consider a luxury sector exchange traded fund (ETF). An ETF is a type of security that tracks an index, sector, commodity, or other asset, but which can be purchased or sold on a stock exchange the same as a regular stock. There are many advantages to ETFs. Diversification is key: An ETF can track a broader range of stocks, or even attempt to mimic the returns of a country or a group of countries. ETFs also tend to have much lower expense ratios compared to actively managed funds—which mutual funds tend to be—because ETFs are passively managed.

The GLUX-Amundi S&P Global Luxury UCITS ETF has total assets under management (AUM) of around 252.04 million EUR (as of June 9, 2021). The goal of this ETF is to track and match the S&P Global Luxury Index’s performance. Its inception date is November 19, 2008, and the management company is Amundi Investment Solutions. The ETF’s asset class focus is on equities and has an expense ratio of 0.25%.﻿﻿

A closed-end fund is a portfolio of pooled assets that raises a fixed amount of capital through an initial public offering (IPO) and then lists shares for trade on a stock exchange. A closed-end fund shares similarities with both mutual funds and ETFs.

However, a closed-end fund is unlike either a mutual fund or an ETF because, after a closed-end funds' IPO, the fund's parent company issues no additional shares, and the fund itself won't redeem—buy back—shares. Instead, like individual stock shares, the fund can only be bought or sold on the secondary market by investors.

One such fund that holds LVMH shares is specific to Europe and is known as the European Equity Fund (EEA). This fund is one of several closed-end funds from DWS Investments. The fund has been around since 1986, has 51 holdings, and has an average holding period of a year and a half. Its total AUM is $87 million, as of March 31, 2021.﻿﻿

LVMH has been growing steadily over the past decade, largely due to its presence in all five major sectors of the luxury market: wines and spirits; fashion and leather goods; perfumes and cosmetics, and watches, jewelry, and selective retailing.

It has also made advantageous acquisitions—for example, purchasing the Italian watchmaker Bulgari and Tiffany & Co.—and adding tremendously to the watch and jewelry segment's revenues. To own LVMH stock you can purchase some ADRs in the OTC market. If the OTC market is not for you, you can consider investing in luxury sector funds or general European funds that hold LVMH.

What Exchange Is LVMH Stock Traded On?

LVMH shares are listed on the Euronext Paris Eurolist.﻿﻿

How Can You Buy LVMH Stock in the U.S.?

Shares of LVMH are not sold directly on exchanges in the U.S. because it is a foreign company. Investors can invest in LVMH by purchasing ADRs, which are negotiable certificates issued by a U.S. depositary bank representing a specified number of shares—often one share—of a foreign company's stock. ADRs trade on U.S. stock markets as any domestic shares would.

What Would LVMH Stock Be Like in a Recession?

Shares of LVMH fared quite well during the recession that was triggered by the Covid-19 pandemic. After plummeting some 30% in late March 2020 (along with the rest of the market), the stock fully recovered by the end of 2020. Since 2015, shares of LVMH have increased by more than 160%.

While shares of LVMH trade at a premium, in general, high fashion is a growing segment of the global economy. Growth in the high-fashion segment has been bolstered by a middle class that loves high fashion, particularly the emerging middle class in China.﻿﻿

LVMH completed the acquisition of Tiffany & Co., the global luxury jeweler, in January 2021.﻿﻿ 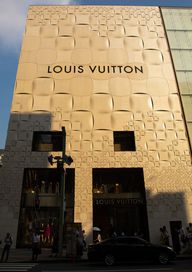 The Best ETFs for Investing in Luxury Goods

10 Biggest Banks in the World
Partner Links
Related Terms
Who Is Bernard Arnault and What Companies Does LVMH Own?
Arnault, the wealthiest person in France and one of the wealthiest in the world, is Chair and CEO of LVMH, the world's largest luxury conglomerate.
more
Conglomerate: Definition, Meaning, Creation, and Examples
A conglomerate is a company that owns a controlling stake in smaller companies—independent operators in similar, but sometimes unrelated, industries.
more
EURO STOXX 50 Index: Definition, Constituents, Methodology
The EURO STOXX 50 Index is a market capitalization weighted stock index of 50 large, blue-chip European companies operating within eurozone nations.
more
Paris Stock Exchange (PAR)
The Paris Stock Exchange (PAR) trades both equities and derivatives and posts the Consumer Advisory Council or CAC 40 Index.
more
STOXX
STOXX is a leading provider of market indexes that are representative of European and global markets.
more
Foreign Exchange Market: How It Works, History, and Pros and Cons
The foreign exchange market is an over-the-counter (OTC) marketplace that determines the exchange rate for global currencies.
more