Stock investors seeking to position themselves for a possible trade deal between the U.S. and China may consider looking at tariff-sensitive stocks. These equities have underperformed the broader market sharply in the recent period, and their cheap valuations could present attractive buying opportunities. According to a recent HSBC report, seven stocks stand out as poised to jump sharply if a trade deal passes, including Nvidia Corp. (NVDA), Skyworks Solutions Inc. (SWKS), Broadcom Inc. (AVGO), Micron Technology Inc. (MU), Marvell Technology Group Ltd. (MRVL), Intel Corp. (INTC) and Apple Inc. (AAPL), all of which generate more than 20% of their total sales from China, per a detailed story in CNBC. Other investors say tariff-sensitive industrial, energy and agricultural stocks could jump, too.

7 Stocks That May Jump On a U.S.-China Trade Deal

After ten years of relatively smooth sailing, the market was shocked with a wave of volatility in 2018, leading the S&P 500 to post its worst year in a decade thanks to a myriad of factors including fears of slowing economic growth, geopolitical uncertainty, rising rates, and an escalating U.S.-China trade war. The trade war marked a dramatic reversal from 2017, when the two nations were on better terms. That year, Chinese President Xi Jinping visited President Donald Trump at Mar-a-Lago, and Trump visited China.

Now, many investors have grown more optimistic about a trade deal with China in 2019. Last month, stocks jumped on the announcement of a 90-day truce between the world’s two largest economies. "Any deal would likely see a relief rally as we believe markets have meaningfully priced in risks of trade tensions escalating," wrote Ben Laidler, HSBC's global equity strategist, per CNBC.

Laidler scanned for stocks of companies that generate over a fifth of their revenue from China, have underperformed over the three-month period, and have cheap stock valuations on a forward price-to-earnings basis.

Chipmaker Skyworks, trading at 9.8 times forward earnings, generates 83% of its revenue from China, following by Broadcom, trading at a forward P/E of 10.7 with 54% of sales coming from China, per CNBC. Both Micron Technology and Marvell Technology, with forward valuation multiples of 4.7 and 11.9 respectively, generate roughly half of their revenues from China.

Other stocks likely to jump on a trade truce include those in the beaten down energy and agricultural sectors. Energy companies could benefit from the Trump administration’s plan to export tens of billions of dollars in shale and liquid natural gas to China. Meanwhile, makers of agricultural products may see sales rise if a trade deal involves China buying “massive amounts” of U.S. farm products, as promised by President Trump. Top picks highlighted by InvestorPlace include Monsanto Co. (MON), Deere & Co. (DE), and Cheniere Energy Corp. (CHK).

The key for investors will be to jump in to these stocks only when the outlines of a deal look probable. It’s important to note that investors have been holding out for a U.S.-China trade deal for much of the past year, frustrating investors who have seen very little materialize. It's also a sure bet that these tariff-sensitive stocks could suffer a large pullback if talks fall through and the trade war heats up again. HSBC estimate, that if a 25% tariff is ultimately imposed on all Chinese goods, 2019 earnings growth will come in 4.5% lower, more than halving the growth rate, according to CNBC.

Qualcomm Has Plenty to Lose in a U.S-China Trade War 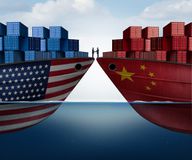 US Futures Plunge After China Retaliates to Trump Tariffs

Apple CEO Tim Cook to Meet Privately With President Trump Today
Partner Links
Related Terms
Commodity Price Risk: Definition, Calculation, and Main Risks
Commodity price risk is price uncertainty that adversely impacts the financial results of those who both use and produce commodities.
more
Trade Wars: History, Pros & Cons, and U.S.-China Example
A trade war arises when one country retaliates against another by raising import tariffs or placing other restrictions on the other country's imports.
more
What Is Mercantilism?
Mercantilism was the primary economic system of trade between the 16th and the 18th centuries with theorists believing that the amount of wealth in the world was static.
more
The Great Depression: Overview, Causes, and Effects
The Great Depression was a devastating and prolonged economic recession that followed the crash of the U.S. stock market in 1929.
more
Special Purpose Acquisition Company (SPAC) Explained: Examples and Risks
A special purpose acquisition company (SPAC) is a publicly traded company created for the purpose of acquiring or merging with an existing company.
more
Gross Domestic Product (GDP): Formula and How to Use It
Gross domestic product is the monetary value of all finished goods and services made within a country during a specific period.
more