The SunTrust Prime Rewards has a three-year introductory offer that allows you to transfer a balance from another card and pay interest at only the Prime Rate—a percentage that has been running in the mid-single digits. The card has no annual fee, and you can earn 1% cash back on qualifying purchases. 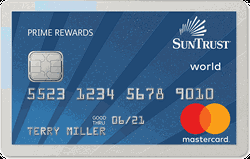 3 year introductory offer on eligible balance transfers at Prime Rate (currently 3.25% variable APR). Plus earn a $100 in statement credit after you spend $500 on qualifying purchases in the first 3 months after account opening.

Recommended Credit Score Our recommended ranges are based off of the FICO® Score 8 credit-scoring model. Credit score is one of the many factors lenders review in considering your application.
350 579
580 669
670 739
740 799
800 850
Good - Excellent
how this card stacks up
When compared among all balance transfer cards in our database:
Low Introductory Interest
Low Fees
Low Long Term Interest
Security/Customer Experience
Benefits
worst best
Read our full methodology.

This card is best-suited to—indeed, exclusively aimed at—people who have high-interest credit card debt on another card and who need a long time to pay it off. The SunTrust Prime Rewards allows a full three years at a very low APR, which allows you plenty of time to pay down your balance without incurring onerous interest charges.

Here’s how this card's APR offer can help reduce costs compared with having no low-interest deal at all.

But let’s say you transferred the $6,000 balance to the SunTrust Prime Rewards card. At the time of publication in early 2020, your APR would be 3.25% (the current Prime Rate) for 36 months. If you continued to pay $180 per month, you’d pay off your full balance before the introductory APR expired. And you’d pay just $397 in interest charges, a savings of more than $1,500 compared with repaying the balance without the deal.

This card’s rewards are fairly meager, but they are increased for those who hold other accounts with SunTrust. Those bonuses (of up to 50%) make the card more appealing if you’re already a customer of SunTrust, or are prepared to take more of your business to the company.

If you spend at least $500 on purchases with your SunTrust Prime Rewards card within the first three months of becoming a cardmember, you’ll get a $100 statement credit.

That spending threshold is easily achievable for most people. If you only use your card to pay for essentials like groceries and gas, you should readily meet the $500 requirement and earn the $100 statement credit—which essentially represents a 20% return on your spending.

The rewards program on the SunTrust Prime Rewards card is simple; there are no spending categories to remember. Instead, you’ll earn a flat 1% cash back on every purchase you make.

However, customers who have other SunTrust accounts can qualify for loyalty bonuses that can increase your rewards.

Cash-back rewards can be redeemed for gift cards, bank deposits, statement credits, merchandise, and travel arrangements. Your rewards have the same value regardless of redemption method.

Using this card whenever you make a purchase will earn a flat 1% cash back on every qualifying transaction. That's not a lot, relatively speaking, but it’s better than nothing if you don’t own a more lucrative rewards card.

To show you how rewards can add up, consider a typical person’s spending. According to the Bureau of Labor Statistics, the average consumer spends:

If you spent those amounts in each category and used your SunTrust Prime Rewards card to pay for each purchase, you’d earn 1% cash back on the $12,666 you spent, giving you $126.66 in rewards.

To get the most value from your card, consider taking advantage of SunTrust’s loyalty bonuses. If you sign up for a SunTrust checking, savings, or money market account, you'll get a 10% loyalty bonus, giving you a higher rewards rate. Premium accounts and high account balances increase the bonus to 25% or 50%.

Assuming that you had a checking or savings account with SunTrust, you’d get a 10% loyalty bonus. In the example we detail above, your cash-back rewards for annual spending would increase from $126.66 to $139.33.

The SunTrust Prime Rewards card does offer some standout benefits for a credit card with no annual fee:

In the J.D. Power Credit Card Satisfaction Study, SunTrust was ranked sixth out of 11 regional bank card issuers. However, SunTrust recently merged with BB&T, the top-ranked regional card issuer, so you might expect even better service going forward than the current ranking for SunTrust suggests.

The customer-service team is based in the United States and is available 24 hours a day, seven days a week. You can get help online through secured online chat, or you can call 1-800-477-9702.

The SunTrust Prime Rewards provides consumers carrying debt on a high-interest card that they’ll need a few years to pay off an appealing solution, and with no annual fee or balance-transfer charges. The card does charge interest, at the Prime Rate, for up to 36 months, but that’s actually cheaper than taking a shorter 0% APR offer and then continuing to pay interest at a market APR for two years after that deal expires.If you don’t need the extended period of interest relief this card provides, though, you’re better off looking to alternative options. Those include other cards that specialize in balance transfers through shorter offers in which no interest at all is imposed. For instance, the Amex Everyday card offers 0% APR on balance transfers for 15 months with an ongoing regular APR of 12.99 - 23.99% variable and no balance transfer fee for transfers made in the first 60 days of account opening.

And almost any other card you choose, no matter the type, will likely beat the the rewards you’ll earn with the SunTrust Prime Rewards. For example, the Discover it Cash Back card allows you to earn 5% cash back on quarterly spending categories on up to $1,500 spent per quarter, and 1% cash back on all other purchases. If you spent the maximum each quarter, for an annual total of $6,000, that means you’d earn $300 in cash back rewards (which Discover will even double during your first year as a cardmember). Contrast that with the mere $125 or so you would earn in cash back with the SunTrust Prime Rewards, for spending about twice as much over the year.

Apply Now
For SunTrust Prime Rewards Credit Card
on SunTrust's Secured Site.
Compare This Card
See how this card compares to similar cards
CURRENT CARD
SunTrust Prime Rewards Credit Card
overall rating
3.8
Apply Now
Recommended Credit Score Our recommended ranges are based off of the FICO® Score 8 credit-scoring model. Credit score is one of the many factors lenders review in considering your application.
350 579
580 669
670 739
740 799
800 850
Good - Excellent
Investopedia Credit Card Rating Methodology
Investopedia is committed to delivering the best credit card recommendations in the industry. We’ll tell you when a card is good, we’ll tell you when a card is bad, and we’ll only call a card the best if we would recommend it to our friends or family members.
Overall Star Rating Explained
To rate credit cards we objectively assess, score and weight nearly 100 individual card features which roll up into five major feature sets: fees, interest, rewards, benefits and security/customer service. Here’s how we weighted those feature sets for the overall star rating of a card:
We have applied our proprietary rating methodology to every generally-accepted credit card in the U.S. domestic market to allow consumers to make fully informed choices. It’s important to note that for our overall score that we make a number of assumptions about how you would be using your credit card: