The term boilerplate refers to standardized text, copy, documents, methods, or procedures that may be used over again without making major changes to the original. A boilerplate is commonly used for efficiency and to increase standardization in the structure and language of written or digital documents. This includes contracts, investment prospectuses, and bond indentures. In the field of contract law, documents contain boilerplate language, which is a language that is considered generic or standard in contracts.

Boilerplate is any text, documentation, or procedures that can be reused more than once in a new context without any substantial changes to the original. Boilerplates are commonly used online and in written documents by a variety of entities including corporations, legal firms, and medical facilities.

Users can make slight changes to the language or certain portions of the text to tailor a document for different uses. For instance, a media release contains boilerplate language at the bottom, which is usually information about the company or product, and can be updated for different situations before being disseminated to the public.

The term is also commonly used in the information technology industry, referring to coding that can be created and reused over and over again. In this case, the IT specialist only has to rework some of the code to fit into the current need, without making major changes to the original structure.

Think of a boilerplate the same as you would think of templates. which provide the user with a basic structure of the text or document that can be changed to suit different needs.

In the 19th century, a boilerplate referred to a plate of steel used as a template in the construction of steam boilers. These standardized metal plates reminded editors of the often trite and unoriginal work that ad writers and others sometimes submitted for publication.

The legal profession began using the term boilerplate as early as the mid-1950s, when an article in the Bedford Gazette criticized boilerplates because they often included fine print designed to skirt the law.

The wording of these passages is generally not up for negotiation with customers, who will often sign boilerplate documents without actually reading or understanding them. This type of boilerplate, written by a party with superior bargaining power and presented to a weaker party, is often called an adhesion contract in the legal profession. Courts may set aside provisions of such contracts if they find them coercive or unfair.

Boilerplating can also be used as a disparaging term to refer to a lack of originality or sincere effort in any activity.

Boilerplate Language in the Modern World

In contemporary times, the term boilerplate is widely applied to a variety of settings. It normally refers to a standardized method, form, or procedure. Computer programmers speak of using boilerplate code to write a new program because modern programs can consist of billions of lines of code, and it is virtually impossible to write them from scratch.

In marketing and public relations, boilerplate refers to blocks of language in marketing materials or press releases that rarely change. They are often written to express a company's mission or otherwise cast it in a positive light and are commonly added to a variety of its publications, press releases, or web pages, including the About Us page on many websites.

Advantages and Disadvantages of Boilerplate

Boilerplates are considered a time and money saver. Companies don't have to waste resources drafting up new documents or contracts. They can simply update existing documents or templates to suit their purpose. Similarly, IT professionals can make a few alterations to existing code to create new text and documents online.

Boilerplates can help prevent mistakes. Original documents and the language are usually already vetted to ensure they are error-free, which means less headache in the future. This provides companies and individuals with protection from any legal problems that may arise from sloppy work. Standard forms provide also users with consistency. This prevents the possibility of inadvertent deviation from one contract or document to the next.

But there are certain disadvantages that come with these as well. For instance, boilerplates are often used flatly across the board, as in the case of some fine print. They are not always tailored to every situation. In most cases, people don't read the fine print and aren't aware of conditions they must uphold, such as being bound to a contract.

Contractual boilerplates often contain language that only favors one party—usually the writer. In these cases, companies rely on the fact that individuals will either skip or skim through these sections.

A bank may use a standard contract for everyone who applies for a home loan. Bank employees and loan applicants may fill in the blanks or select from lists of checkboxes, depending on the circumstances, rather than create an entirely new document for every new applicant. These documents typically remain unchanged so that the parties using them are not misled into accepting unfavorable conditions that even small changes in the boilerplate text could cause.

Another example of a boilerplate is the fine print that appears on many contracts. This section is usually static, as is the case with many cell phone contracts. This indicates what fees, charges, and other rules that may apply to someone's service. But companies may make minor changes to the text when needed.

What Is a Boilerplate Statement?

What Is a Boilerplate Project?

A boilerplate project is a project set up that can be easily altered to create new projects. The user is able to use the original project, its foundation, and its structure to set up a new one without changing the original. This is commonly found in the information technology sector, where coders update existing code to make changes to webpages.

Why Is It Called Boilerplate Language?

The term boilerplate language dates back to the 19th century, when steel plates were used as templates to create steam boilers. This application of the term was used in the legal profession in the mid-1950s to describe how companies used fine print to get around the law.

What Is a Boilerplate in a Press Release Example?

The boilerplate in a press release is often found at the bottom. This text is used to briefly identify and describe the company issuing the release.

What Is a Boilerplate Clause in a Contract?

A boilerplate clause is a standard section in a contract that is found at the end or bottom of the document. This clause normally outlines certain conditions enforced to which parties must adhere, including when a contract is broken and how any problems and disputes are resolved.

Boilerplates are a big part of the corporate and information technology sectors. These tools help save time and money, allowing text and documents to be created for use over and over again. For instance, the fine print or boilerplate clause is found on legal contracts while boilerplates are standard messages found in press releases. While they do serve a purpose, it's important to remember that you shouldn't skim over these sections if you ever come across them. That's because they often contain important information about your rights.

Article Sources
Investopedia requires writers to use primary sources to support their work. These include white papers, government data, original reporting, and interviews with industry experts. We also reference original research from other reputable publishers where appropriate. You can learn more about the standards we follow in producing accurate, unbiased content in our editorial policy.
Take the Next Step to Invest
×
The offers that appear in this table are from partnerships from which Investopedia receives compensation. This compensation may impact how and where listings appear. Investopedia does not include all offers available in the marketplace.
Service
Name
Description
Related Terms
Term Sheets: Definition, What's Included, Examples, and Key Terms
A term sheet is a non-binding agreement that sets out the basic terms and conditions of an investment.
more
Uniform Bill of Lading
A uniform bill of lading is an agreement between an exporter and a carrier regarding property to be transported.
more
Statute of Frauds: Purpose, Contracts It Covers, and Exceptions
The statute of frauds is a legal concept that stipulates that certain types of contracts must be executed in writing to be valid.
more
Assembly Language
An assembly language is a type of low-level programming language that is intended to communicate directly with a computer’s hardware.
more
Breach of Contract Explained: Types and Consequences
A breach of contract is a violation of any of the agreed-upon terms and conditions of a binding contract.
more
Visual Basic for Applications (VBA): Definition, Uses, Examples
Visual Basic for Applications (VBA) is part of Microsoft's legacy software, Visual Basic, built to help write programs for the Windows operating system.
more
Partner Links
Related Articles

How Does DocuSign Make Money?

What Are Your Legal Rights in a Foreclosure? 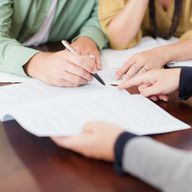 The SEC's Rules and Regulations on Social Media Use