What Is Cost Per Available Seat Mile?

Cost per available seat mile (CASM) is a common unit of measurement used to compare the efficiency of various airlines.

It is obtained by dividing the operating costs of an airline by available seat miles (ASM). Generally, the lower the CASM, the more profitable and efficient the airline.

Cost per available seat mile (CASM) is usually a more comprehensive measurement of airline costs, but it's still important that investors are aware of what items comprise this measurement. Many carriers exclude fuel costs from operating expenses, making the CASM an unreliable metric. Cost per available seat mile, as the name suggests, reflects the costs incurred by an airline to fly a single-seat one mile.

A natural extension of CASM is RASM, or revenue per available seat mile, which helps facilitate a revenue to expense comparison, particularly helpful when comparing rival airlines or results to a benchmark. Other methods of calculating an airline's cost to fly include looking at cost or revenue miles per passenger or per ton of fuel.

More general, the available seat mile, or ASM, tends to be the preferred measure of capacity within the airline industry. This metric is found by multiplying the number of seats on each plane by the number of miles that plane flies during a particular period of time (such as a month, quarter, or year) and summing up the results. Hence, an airline with a single plane of 170 seats that travels 4,500 miles per day is generating 765,000 ASMs each day.

There are numerous capacity measures available, such as the number of flights or the total number of seats on each flight, but neither is as effective for comparative purposes as ASMs. For example, tallying the total number of flights does not differentiate between a 50-seat plane and a 500-seat plane, and counting the number of seats on each flight treats a 700-mile flight the same as a 5,000-mile flight.

Southwest Airlines (NYSE: LUV) is a regional airline in the U.S. known for its no-frills but low-cost flights. Its ticket prices are low because Southwest has a low operating cost structure. In fact, its management states that unit costs are among the lowest in the industry. based on CASM.

Let's take a historical example: After posting a CASM of 12.6 cents in 2014, the airline managed to shrink that to 10.66 cents in 2021. This allows the company to profit even as it offers low fares to its customers. The figure is also lower than its major competitors. For instance, operating expense per ASM was 15.15 cents for the first quarter of 2018 for American Airlines. At Delta Airlines, the figure was 15.07 cents for the fourth quarter of 2017. With United, its CASM for 2Q 2018 was 13.08 cents.

How Is CASM Calculated?

To calculate CASM, divide the operating cost of an airline by the available seat miles (ASM). The CASM is then expressed in cents.

What Is Revenue per Available Seat Mile (RASM)?

RASM is the counterpart to CASM, in that it measures how much money is generated for airlines per seat mile. If RASM is greater than CASM, the airline shows a gross profit.

Where Can You Find an Airline's CASM Figure?

An airline's CASM is reported on its quarterly and annual financial statements.

What Is an Available Seat Mile (ASM)?

Seat miles are calculated by multiplying the available seats for a given plane by the number of miles that plane will be flying for a given flight. This carrying capacity of an airplane is used to estimate revenues and costs.

CASM is a measurement used to compare the efficiency of various airlines. It represents the cost, per mile, for an airline to fly one seat. Southwest Airlines is known to have one of the lowest CASMs in the industry, though the measure is not all-encompassing so it is not always a reliable measurement of efficiency on its own.

Article Sources
Investopedia requires writers to use primary sources to support their work. These include white papers, government data, original reporting, and interviews with industry experts. We also reference original research from other reputable publishers where appropriate. You can learn more about the standards we follow in producing accurate, unbiased content in our editorial policy.
Take the Next Step to Invest
×
The offers that appear in this table are from partnerships from which Investopedia receives compensation. This compensation may impact how and where listings appear. Investopedia does not include all offers available in the marketplace.
Service
Name
Description
Related Terms
Airline Industry ETF
An airline industry ETF tracks the performance of a group of stocks of airline companies.
more
Revenue Per Available Seat Mile (RASM)
Revenue per available seat mile or RASM is a measurement used to compare the financial performance of airlines, based on revenue per available seat.
more
Revenue Passenger Mile (RPM)
A Revenue Passenger Mile is a transportation industry metric that shows the number of miles traveled by paying passengers.
more
Available Seat Miles (ASM)
Available seat miles is the measure of an airplane's carrying capacity available to generate revenues.
more
Revenue Ton Mile
A revenue ton mile is an important metric in the transport industry that measures the amount of freight shipped and how far it's moved.
more
Profit Margin Defined: How to Calculate and Compare
Profit margin gauges the degree to which a company or a business activity makes money. It represents what percentage of sales has turned into profits.
more
Partner Links
Related Articles 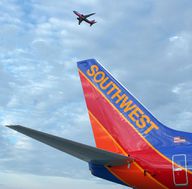 How Much Airline Revenue Comes From Business Travelers?

An Economic Analysis of the Low-Cost Airline Industry

How to Fly First Class for Cheap
Dialog Heading