What Is a Decedent?

"Decedent" is a legal term used in tax and estate planning for a deceased person. When an individual dies, their possessions become part of their estate, and they are denoted as decedent or deceased. The legal will of a decedent defines the final transactions of their estate.

Estate and Tax Implications for a Decedent

When a person dies, they become a decedent, and their will and trust remain to provide directions for handling their money and other assets. The legal process of executing a will or trust always refers to the deceased as a decedent. Attorneys and trustees carry out a decedent's wishes after their deaths by executing what is in their wills and trusts.

A decedent may owe federal or state taxes and their estate will be responsible for and requires the decedent to file a final tax return. Other taxes that involve a decedent are estate and inheritance tax. In 2022, the estate federal tax exemption was $12.06 million. This amount increased to $12.92 million in 2023, to account for inflation.

State tax exemptions either match the federal level or vary depending on the state the decedent resided in at the time of their death. The federal government does not take an inheritance tax, but six states impose inheritance taxes, including Pennsylvania and Nebraska.

Intended to provide peace of mind for a decedent that their assets are allocated correctly, a trust establishes a fiduciary duty for a trustee and the trustee is legally responsible for making decisions in the best interests of the beneficiaries outlined in the trust.

Example of a Decedent

Mary has created an estate for her family after retirement. After her death, Mary became a decedent. She leaves life insurance, $15,000 in a checking account, and a small retirement fund. The decedent's remaining debts are paid from the decedent's estate, along with any money owed in taxes on the decedent's final tax return.

In addition, Mary names the beneficiaries for her life insurance, and on her death, those funds are paid out to the individuals named on her benefits.

How Do I Report Income in Respect of a Decedent?

The income in respect of a decedent and final earned income must be reported to the IRS, and their final taxes must be filed by the trustee of the decedent's estate. Both forms of income can include wages, social security payments, tips, sick pay, vacation time, and retirement income, to name a few.

What Is the Difference Between Deceased and Decedent?

A deceased person is a dead person. A decedent is a legal term for someone dead often used in estate planning documents. When a person dies, they become a decedent. Still, in some ways, their name lives on due to their financial obligations after death, such as paying taxes, closing bank accounts, and other items—all carried out by their trustee who acts on behalf of the decedent.

What Type of Trust Is a Decedent Trust?

A decedent trust is another name for a joint trust called an A-B trust. A married couple sets up this type of trust to minimize estate taxes. An A-B trust is formed between two spouses, but the trust divides once the first spouse dies. The parts represent the survivor (trust A) and the decedent (trust B).

Decedent is a legal term used in tax and estate planning for a deceased person. Decedents have financial obligations after death and attorneys and trustees are responsible for carrying out a decedent's wishes as outlined in their wills and trusts.

Article Sources
Investopedia requires writers to use primary sources to support their work. These include white papers, government data, original reporting, and interviews with industry experts. We also reference original research from other reputable publishers where appropriate. You can learn more about the standards we follow in producing accurate, unbiased content in our editorial policy.
Take the Next Step to Invest
×
The offers that appear in this table are from partnerships from which Investopedia receives compensation. This compensation may impact how and where listings appear. Investopedia does not include all offers available in the marketplace.
Service
Name
Description
Related Terms
Testamentary Trust: Definition, Examples, Pros and Cons
A testamentary trust is a legal entity that manages the assets of a deceased person in accordance with instructions in the person's will.
more
Probate Court: Definition and What Goes Through Probate
Probate court is part of the judicial system handling wills, estates, conservatorships, and guardianships. Read our guide on how probate court works.
more
What Is an Executor? Definition and Responsibilities
An executor is an individual appointed to administrate the estate of a deceased person. The executor's main duty is to carry out the instructions and wishes of the deceased.
more
What Is a Legal Trust? Common Purposes, Types, and Structures
A trust is a fiduciary relationship in which the trustor gives the trustee the right to hold title to property or assets for the beneficiary.
more
Last Will and Testament: Definition, Types, and How to Write One
A last will and testament is a legal document detailing your wishes regarding assets and dependents after your death. Find out how to make a will.
more
Inheritance Tax: What It Is, How It's Calculated, and Who Pays It
Inheritance tax is a tax imposed on those who inherit assets from an estate. Discover who pays inheritance taxes and how much you might owe.
more
Partner Links
Related Articles 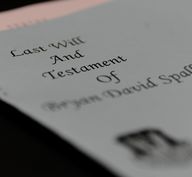