Douglass C. North was an American economist who received the 1993 Nobel Prize in economics for his study of the role of institutions in economic history.

He is the author of several books including, The Economic Growth of the United States from 1790 to 1860, and Structure and Change in Economic History.

Douglass C. North was born on Nov 5, 1920, in Cambridge, Mass. He earned a bachelor's degree and Ph.D. from the University of California at Berkeley. North held positions as a senior fellow with the Hoover Institution, and as a navigator in the U.S. Merchant Marines.

Douglass C. North served as a professor of economics at the University of Washington from 1950 to 1983 before moving to Washington University in St Louis, where he taught for 28 years.

Douglass C. North once stated, "what I wanted to do with my life was to improve societies, and the way to do that was to find out what made economies work the way they did or fail to work."

Challenging neo-classical economic theories, North is one of the founding fathers of the influential new institutional economics, which extends economics to include societal institutions, the norms and conventions of the group, like laws, property rights, politics, customs, and belief systems.

He was a pioneer of cliometrics, the merging of economic theory with statistical analysis to show the process and definition of economic growth. In 1993, cliometrics pioneers Robert Fogel and Douglass North received the Nobel Prize in economics, recognized for applying their methods to explain economic and institutional change and making it “possible to question and to reassess earlier results."

The method of applying statistical analysis to explain economic history.

North's work led agencies in the early 1990s to shift their attention from technical economic issues toward broader institutional concerns, reflected in the World Bank’s motto "institutions matter". He became an influential adviser to governments in China, Latin America, and elsewhere. In particular, he was in high demand in Eastern Europe and newly independent former Soviet states in the 1990s.

What Is the Legacy of Douglass C. North?

What Is the Theme of Douglass C. North's First Book, "The Economic Growth of the United States From 1790 to 1860"?

North challenges previous versions of the neo-classical economic theories regarding long-term economic growth. and that a new method of assessment was required.

How Does Douglass C. North Integrate Markets and Institutions?

According to North, markets are embedded in institutions and function differently depending on the specific institutional framework in each country. He defined institutions as the formal rules, established practices, and social norms that shape incentives in economic exchange. While some institutions promote economic efficiency and growth, others do not.

Douglass C. North was an American economist known for his work on the influence of institutions on economic theory. Credited as a pioneer of cliometrics, North integrated statistical analysis with theory to further define the measurement of long-term economic growth within societies.

Cliometrics
Cliometrics is a method of analyzing history through the application of quantitative methods.
more
Who Was Thomas C. Schelling?
Thomas C. Schelling was an American economist who received the 2005 Nobel Prize in economics for his application of game theory to social, political and economic problems.
more
Who Is George Akerlof?
George A. Akerlof is an economist and professor who earned the 2001 Nobel Prize in economics for his analysis of markets with asymmetric information.
more
Who Was Merton Miller?
Merton Miller was a prominent American economist and educator. He is known for developing the Modigliani-Miller Theorem with Franco Modigliani.
more
Who Is Joseph Stiglitz?
Joseph Stiglitz is an American and New Keynesian economist. He is the winner of the 2001 Nobel Prize in economics for his research using information asymmetry.
more
Who Is Harry Markowitz?
Harry Markowitz is the U.S. economist who devised Modern Portfolio Theory in 1952—and fundamentally changed the way that people and institutions invest.
more
Partner Links

Who Was Adam Smith?

Who Is Dambisa Moyo?

What Is the Theory of Asymmetric Information in Economics?

Who Is Sheryl Sandberg? 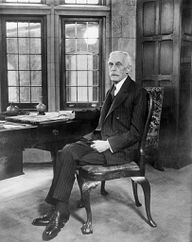