ESports turns online gaming into a spectator sport. It mimics the experience of watching a professional sporting event, except instead of watching a physical event, spectators watch video gamers compete against each other. The eSports trend has become so widespread in recent years that games can often be viewed at an organized arena event.

As with traditional sports, these games are broken down into competitive leagues and tournaments.

Although the eSports industry is not new (it has been around since the 1990s) it has only recently begun to gain traction. Advances in technology have allowed the user experience to replicate real life. Plus, advanced Internet services solve connectivity issues and allow the user and the spectator to immerse themselves in the game without interruption.

Additionally, the mobile revolution has allowed users to access these games from anywhere; they no longer have to sit at home in front of their computers in order to engage in playing or watching online sports. These technological advances have allowed eSports to become a more prevalent part of people's day-to-day lives. The majority of users are males who work full-time and are between the ages of 21 and 35, and it's now easier for them to work eSports into a busy lifestyle.

eSports are particularly popular in much of Europe. Video gaming is the most popular YouTube genre in Scandinavian and Eastern European countries, and many countries have capitalized on the popularity by broadcasting eSports on major sports channels.

Major Players of the eSports Industry

There have been several major eSports operators, such as Turtle Entertainment, Major League Gaming (MLG), and Dreamhack. Activision Blizzard, one of the leading game publishers, bought out Major League Gaming in 2016 and has also developed its own proprietary eSports platform.

Large broadcasters have also invested heavily in the eSports industry, with U.S. sports broadcaster ESPN releasing its own eSports brand at the beginning of 2016 including its own awards and ceremony. Moreover, many European countries have started broadcasting eSports on major channels. In addition, large online gaming platforms dedicate resources to eSports streaming. Epic Games, in particular, has made great strides with Fortnite game tournaments and competitions available for fan viewing.

Article Sources
Investopedia requires writers to use primary sources to support their work. These include white papers, government data, original reporting, and interviews with industry experts. We also reference original research from other reputable publishers where appropriate. You can learn more about the standards we follow in producing accurate, unbiased content in our editorial policy.
Take the Next Step to Invest
×
The offers that appear in this table are from partnerships from which Investopedia receives compensation. This compensation may impact how and where listings appear. Investopedia does not include all offers available in the marketplace.
Service
Name
Description
Related Terms
What Is Decentraland?
Decentraland is a digital game that is part of a growing trend that has led to metaverse-related coins proliferating dramatically.
more
What Is Ethereum and How Does It Work?
Ethereum is a blockchain-based software platform with the native coin, ether. Ethereum smart contracts support a variety of distributed apps across the crypto ecosystem.
more
Digital Marketing Overview: Types, Challenges, and Required Skills
Digital marketing is a means of advertising and selling products through the internet, mobile devices, social media, search engines, display advertising, and other channels.
more
Interactive Media: Definition, Types, and Examples
Interactive media is a method of communication whereby the program's outputs depend on the user's inputs, and the user's inputs affect the outputs.
more
Coincheck
Coincheck is a Tokyo-based cryptocurrency exchange and digital wallet founded in 2012.
more
Sportsbook Definition
A sportsbook is a company or entity that accepts bets.
more
Partner Links
Related Articles

How Twitch.tv and Its Business Model Work 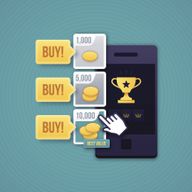 How Microtransactions Impact the Economics of Gaming

How FanDuel and DraftKings Work