What Is an Impulse Wave Pattern?

An impulse wave pattern is an indication of a strong move in a financial asset's price coinciding with the main direction of the underlying trend. Impulse waves can refer to upward movements in uptrends or downward movements in downtrends.

The term is used frequently by adherents of Elliott Wave theory, a method for analyzing and predicting price movements in the financial markets.

The interesting thing about impulse wave patterns in relation to the Elliott Wave theory is that they are not limited to a certain time period. A wave can last for several hours, several years, or decades.

Elliott Wave theory was formulated by R.N. Elliott in the 1930s based on his study of 75 years of stock charts covering various time periods. Elliott designed his theory to provide insights into the probable future direction of larger price movements in the equity market. The theory can be used in conjunction with other technical analysis methods to pinpoint potential opportunities.

Wave patterns are also a part of the Elliott Wave oscillator, a tool inspired by Elliott Wave theory that depicts price patterns as positive or negative above or below a fixed horizontal axis.

Elliott Wave theory continues to be a popular trading tool, thanks to Robert Prechter and his colleagues at Elliott Wave International, a market research firm formed to apply and enhance Elliott’s original work by integrating it with such current technologies as artificial intelligence.

Article Sources
Investopedia requires writers to use primary sources to support their work. These include white papers, government data, original reporting, and interviews with industry experts. We also reference original research from other reputable publishers where appropriate. You can learn more about the standards we follow in producing accurate, unbiased content in our editorial policy.
Take the Next Step to Invest
×
The offers that appear in this table are from partnerships from which Investopedia receives compensation. This compensation may impact how and where listings appear. Investopedia does not include all offers available in the marketplace.
Service
Name
Description
Related Terms
Elliott Wave Theory: How to Understand and Apply It
The Elliott Wave theory is a technical analysis toolkit used to predict price movements by observing and identifying repeating patterns of waves.
more
Corrective Waves
Corrective waves are a set of price movements normally associated with the Elliott Wave Theory of technical analysis.
more
Either-Way Market
In investing, an either-way market describes a situation where there is roughly an equal chance for a market to move up as it is for it to move down.
more
What Are Fibonacci Retracement Levels, and What Do They Tell You?
Fibonacci retracement levels are horizontal lines that indicate where support and resistance are likely to occur. They are based on Fibonacci numbers.
more
Dow Theory Explained: What It Is and How It Works
The Dow Theory states that the market is trending upward if one of its averages advances and is accompanied by a similar advance in the other average.
more
Fibonacci Fan
A Fibonacci fan is a charting technique using trendlines keyed to Fibonacci retracement levels to identify key levels of support and resistance.
more
Partner Links
Related Articles 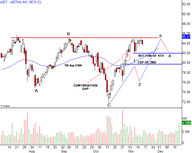 Keep It Simple and Trade With the Trend

Fibonacci and the Golden Ratio