What Is it to Let Your Profits Run?

"Let your profits run" is an expression that encourages traders to resist the tendency to sell profitable positions too early.

The flipside of letting profits run is to cut losses early. The way to make money as a trader, according to many, is to follow both of these pieces of advice: to let winners (profits) run their course, and to cut losing bets before they spiral into deep losses.

While this advice is offered by many, it is followed by few. This is because it is more difficult than it may appear. Most traders tend to take gains off the table early out of fear that they will evaporate quickly. They also tend to hold onto large losing positions in the hope that they will rebound.

Instead of letting profits run, some traders prefer to have a target exit point that will lock in a predetermined profit. Likewise, traders often use stop-loss trading that automatically enables them to exit a trade if a decline of a specified amount occurs.

Trading is generally considered a difficult skill to master and one that cannot be boiled down to a simple maxim. Successful traders are highly knowledgeable about the markets they trade whether stock, options, currencies, or commodities. Knowledge of common trading patterns both of specific securities and of the market as a whole is critical. Successful traders typically have gained this knowledge via education and real-world experience.

When to Sell a Stock and Trading Psychology

One reason why people flip the advice they are given and cut losses early while holding too long on to losers has to do with what behavioral economists have identified as loss aversion. This means that a potential loss is more psychologically harmful than an equivalent gain.

As a result, people will tend to hold on to losers or even double down with the hopes of breaking even again, often taking on too much risk. At the same time, people will fear that small gains will evaporate and lock them in too soon. In trading, this is known as the "disposition effect."

There are generally three good reasons to sell a stock:

While there are many other additional reasons for selling a stock, they may not be as wise of investment decisions.

Here's an all-too-common scenario: You buy shares of stock at $25 with the intention of selling it if it reaches $30. The stock hits $30 and you decide to hold out for a couple more gains. The stock reaches $32 and greed overcomes rationality. Suddenly, the stock price drops back to $29. You tell yourself to just wait until it hits $30 again. This never happens. You finally succumb to frustration and sell at a loss when it hits $23.

In this scenario, it could be said that greed and emotion have overcome rational judgment. The loss was $2 a share, but you actually might have made a profit of $7 when the stock hit its high.

These paper losses might be better ignored than agonized over, but the real question is the investor's reason for selling or not selling. To remove human nature from the equation in the future, consider using a limit order, which will automatically sell the stock when it reaches your target price. You won't even have to watch that stock go up and down. You'll get a notice when your sell order is placed.

Why should I let profits run if a stock is up?

You should typically only sell a winning position if the price has risen to your target or to where fundamentals support. If fundamentals do not support a rally or it has reached or exceeded your target price, by all means, sell. Otherwise, people tend to sell their winners too early. To avoid selling too early, you should hang on until some objective (and not emotional or psychological) price level.

What if things change and my target price is revised lower?

As market dynamics change, you should also revise your exit point and sell when appropriate.

What is the disposition effect?

The disposition effect in behavioral finance describes a type of loss aversion whereby traders hang on to their losers for too long and sell their winners too early. This psychological bias, where losses loom larger than gains, can be detrimental. Letting profits run and cutting losses is the better and more rational strategy - but psychologically more difficult to execute in practice.

Take the Next Step to Invest
×
The offers that appear in this table are from partnerships from which Investopedia receives compensation. This compensation may impact how and where listings appear. Investopedia does not include all offers available in the marketplace.
Service
Name
Description
Part Of
Behavioral Finance
Related Terms
Disposition: Definition, How It Works in Investing, and Example
Getting rid of an asset or security through a direct sale or some other method is known as a disposition.
more
Regret Avoidance
Regret avoidance is a theory of investor behavior that analyzes why investors hold on to, or even add to, poorly-performing investments, even in the face of clear signs that they should sell.
more
Behavioral Finance: Biases, Emotions and Financial Behavior
Behavioral finance is an area of study that proposes psychology-based theories to explain market outcomes and anomalies.
more
Value Investing Definition, How It Works, Strategies, Risks
Value investors like Warren Buffett select undervalued stocks trading at less than their intrinsic book value that have long-term potential.
more
What Is Behavioral Economics? Theories, Goals, and Applications
Behavioral Economics is the study of psychology as it relates to the economic decision-making processes of individuals and institutions.
more
Trading Psychology: Definition, Examples, Importance in Investing
Trading psychology refers to the emotions and mental state that help to dictate success or failure in trading securities.
more
Partner Links
Related Articles

When to Sell a Stock

How to Trade Stocks 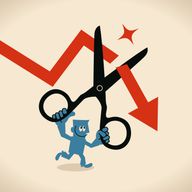 The Art of Cutting Your Losses

The Importance of Trading Psychology