What Is a Maquiladora?

The term maquiladora refers to a factory or manufacturing plant in Mexico. These corporations are approved for operation by the country's Secretariat of Commerce and Industrial Development under a decree established in 1989 and are owned by foreign entities.

Maquiladoras were first developed in the 1960s as a way to encourage foreign investment and address unemployment. As such, they usually operate near the U.S.-Mexico border. Companies that operate under the maquiladora model are able to take advantage of numerous benefits. The products manufactured by these factories are normally exported beyond the Mexican border.

As noted above, a maquiladora is a factory located in Mexico but owned and run by a foreign entity. The first plants of this kind were established in 1961 to help stimulate the domestic market and attract foreign investment. Many of these companies are located along the United States-Mexico border. The structure of a maquiladora system is set up so that the parent company is located in the United States while the manufacturing operation or factory is located in Mexico.

The Mexican Secretary of the Economy determines whether a plant is officially considered a maquiladora. This official designation is important because it qualifies the plant for unlimited foreign capital investment and duty-free imports. Duty-free imports apply to the raw and semi-finished materials shipped after manufacture or assembly, as well as to the machinery used in the manufacturing process.

The factories that participate in the maquila program, which are also known as twin plants, manufacture a variety of goods. In fact, there are thousands of maquiladoras that produce everything from clothing and consumer electronics to cars, drones, medical devices, and aircraft components. Export may be direct or indirect, whether that's through the sale of products or shipping through another factory or export company.

These factories have certain tax advantages that make them attractive to businesses. Companies can capitalize on a cheaper labor force in Mexico and also receive the benefits of doing business in the U.S. The presence of maquiladoras contributed significantly to the industrialization of the Mexican-American border.

Although maquilas can open anywhere in Mexico, they are not permitted to operate in highly congested parts of the country, including Guadalajara, Mexico City, and the Monterrey urban areas.

Benefits of a Maquiladora

As noted above, there are a number of benefits that come with establishing a maquiladora. We've listed some of the most common ones below.

The first and obvious advantage is the economic benefit that comes with establishing maquiladoras for Mexico as well as border cities and states where they may be located. Once these factories are set up, they provide a source of labor for local residents and can help boost the local economy. Maquilas effectively help industrialize border cities in Mexico that may otherwise be characterized by high unemployment.

The economies of border cities and states also benefit because of the administrative centers that are set up on the U.S. side, as well as the transport and customs services that result from import-export operations.

Companies can take advantage of lower costs and tax benefits by setting up maquilas. Labor costs are fairly low in Mexico, which makes production cheaper. That's because there's a larger labor pool that may be looking for work.

Maquilas also help companies cut down the costs associated with tariffs and duties. For instance, companies are exempt from the 16% value-added tax (VAT) on raw materials used for production. They are also exempt from paying duties when they export goods marked "Made in Mexico" to Canada and the U.S. This is because of the trade relationship that exists between the U.S. and Mexico under the U.S.-Mexico-Canada Agreement (USMCA).

Border towns are commonly known for high unemployment rates, where people are actively looking for work. Setting up a maquila in a Mexican town gives companies access to a greater and cheaper labor pool. Although many of the people available for work may be unskilled, it gives workers a chance to transition to the skilled category.

Aside from a few exceptions, maquilas can be set up anywhere in Mexico. But from a logistical standpoint, it makes more sense to establish a presence along the border of Mexico and the United States. Many maquiladoras are also strategically located close to airports, roads, railroads, and shipping ports.

Proximity helps lower costs, including transport expenses, and improves supply chain management. For instance, a company may decide to locate the parent company in San Diego and the plant in Tijuana rather than setting up a shop in Detroit and Matamoros.

Although they may provide numerous economic benefits, maquilas have come under fire for the way they may exploit the labor force. Although they provide competitive wages for those who work in these facilities, the pay is still relatively low. In fact, the pay can be at or below the poverty line. Wages are normally based on daily rather than hourly rates and workers are often contracted for 48-hour shifts each week.

This is compounded by American border and migrant policies, as well as an increased military presence at the border. Migrants who want to enter the United States from Central America often seek work in these facilities. This demand for employment from non-Mexicans allows corporate management to take advantage of these workers by paying them drastically lower wages.

The conditions of employment may also be a big issue for plant workers. For instance, workers may experience health risks and unsafe working conditions. Housing conditions may be unsound or inadequate, especially for migrant workers.

There is often a lack of representation for workers. Labor unions may exist on paper, giving workers false hope that their needs and demands are met. And employment contracts are often written in favor of plant owners rather than workers, giving virtually no protection to workers' rights.

The ratification of the North American Free Trade Agreement (NAFTA) in 1994 ended tariffs that impacted the maquiladoras system. Mexican import duties were waived and these factories were able to take advantage of preferential duty rates for certain products. This led to an explosion in the number of maquiladoras—the second half of the 1990s saw the number of maquiladoras nearly doubled each year—not to mention a boost in economic growth to the tune of $345 billion in 2014.

Improvements were made to the maquiladora program through the IMMEX program, which was formerly known as the Maquiladora Program. This new program increased the benefits, leading to a further reduction in costs, increased operational efficiencies, and the modernization of the establishment process. Under the program, companies can register as one of the following entities:

The IMMEX Program has led to significant growth in the industry. Reports indicate that export increased between 2005 and 2017 from $210 billion to $419 billion.

How Have Maquiladoras Impacted the Mexican Economy?

Maquiladoras have a significant impact on Mexico's economy. They employ millions of workers each year, many of whom are unskilled. By giving them access to employment, these plants help the individuals make the leap from unskilled to skilled workers. These facilities also make up a good portion of the goods exported to the United States.

Are Maquiladoras Similar to Sweatshops?

While there may be cases of unsafe working conditions or unscrupulous maquila owners who take advantage of their employees by paying them low wages, they don't have the same reputation as sweatshops. Sweatshops don't provide their workers with a living wage and the overall conditions are unsafe to the point where they may even be dangerous. Many of these establishments employ children and women, don't provide any job security or guarantee of wages.

Where Are Maquiladoras Generally Located?

Although there's no limitation to where maquiladoras can be located, they are generally found along the border of the United States and Mexico.

Who Benefits the Most from Maquiladoras?

Border cities and states tend to benefit the most from maquiladoras. Those in Mexico benefit from the creation of plants and facilities and a boost in labor and employment. American companies can benefit from cheaper labor costs, a reduction in production costs, import-export tariffs, and duties.

Article Sources
Investopedia requires writers to use primary sources to support their work. These include white papers, government data, original reporting, and interviews with industry experts. We also reference original research from other reputable publishers where appropriate. You can learn more about the standards we follow in producing accurate, unbiased content in our editorial policy.
Take the Next Step to Invest
×
The offers that appear in this table are from partnerships from which Investopedia receives compensation. This compensation may impact how and where listings appear. Investopedia does not include all offers available in the marketplace.
Service
Name
Description
Related Terms
What Is the North American Free Trade Agreement (NAFTA)?
The North American Free Trade Agreement (NAFTA) was implemented in 1994 to encourage trade between the countries of United States, Mexico, and Canada.
more
Fragmentation: Definition, Examples, Pros and Cons in Business
Fragmentation is the use of various suppliers and manufacturers to produce a good. It can also refer to market, industry, and business fragmentation.
more
Industrial Revolution Definition: History, Pros, and Cons
The Industrial Revolution was a period of radical modernization and mechanization that began in Great Britain and spread to the United States.
more
Minimum Wage: Federal vs. State, Exceptions and FAQs
The minimum wage is a legally mandated price floor on hourly wages, below which nonexempt workers may not be offered a job or agree to work.
more
Unemployment Insurance (UI): How It Works, Requirements, and Funding
Unemployment insurance is a benefit for workers who have lost their jobs and meet certain eligibility requirements.
more
What Is a Free Trade Area? Definition, Benefits and Disadvantages
Free trade areas are formed by groups of countries that sign agreements to facilitate trade and reduce trade barriers.
more
Partner Links
Related Articles

How Did NAFTA Affect the Economies of Participating Countries?

The Cost of Making an iPhone

How Much Does the US Trade With Mexico? 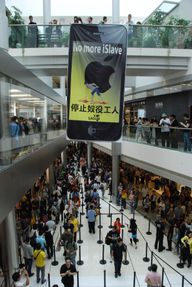