What Are Net Exports?

A country that enjoys net exports brings in more revenues from goods sold overseas than it spends on total imports. Exports consist of all the goods and other services a country sends to the rest of the world, including merchandise, freight, transportation, tourism, communication, and financial services. Companies export products and services for a variety of reasons. Exports can increase sales and profits if the goods create new markets or expand existing ones, and they may even present an opportunity to capture significant global market share. Companies that export spread business risk by diversifying into multiple markets. Exporting into foreign markets can also reduce per-unit costs by expanding operations to meet increased demand. Finally, companies that export into foreign markets gain new knowledge and experience that may allow the discovery of new technologies, marketing practices, and insights into foreign competitors.

If a nation's currency is weak in relation to other currencies, the goods available for export become more competitive in international markets as their prices are relatively less expensive, which encourages positive net exports. If a country has a strong currency, its exports are more expensive and consumers will pass them up for cheaper local products, which can lead to negative net exports.

Countries produce goods based on the resources and skilled labor capacity available. Whenever a country cannot produce a particular good efficiently but still wants it, that country can buy it from other countries who produce and sell that good via an import. Likewise, if other countries demand goods that your country is able to produce well, they may be available as an export to overseas markets.

A net exporter is a country, which in aggregate, sells more goods to foreign countries through trade than it brings in from abroad. Saudi Arabia and Canada are examples of net exporting countries because they have an abundance of oil which they then sell to other countries that are unable to meet the demand for energy. A net exporter, by definition, runs a current account surplus in aggregate.

Note that a country may run either deficits or surpluses with individual countries or territories depending on the types of goods and services traded, the competitiveness of these goods and services, exchange rates, levels of government spending, trade barriers, etc. A net importer or net exporter looks at the overall balance of trade on net. It is also important to note that a country can be a net exporter in a certain area, while being a net importer in other areas. For example, Japan is a net exporter of electronic devices, but it must import oil from other countries to meet its needs. On the other hand, the United States is a net importer and runs a current account deficit as a result.

Some economists believe that running a consistent trade deficit harms a nation's economy by giving domestic producers an incentive to relocate overseas, creating pressure to devalue the nation's currency, and forcing a lowering of its interest rates. However, the United States has both the world's largest deficit and its largest gross domestic product (GDP). That suggests that running a trade deficit is not inevitably detrimental. The free market keeps trade imbalances in check with the aid of exchange rate adjustments.

According to World Bank data, the most prolific exporter by percentage of gross domestic product (GDP) in 2019, for which the latest data is available, was Luxembourg at 209% (if you don't recall buying any products made in Luxembourg lately, you should know that its main trading partners are Germany, France, and Belgium, and it exports many products including steel and machinery, diamonds, chemicals, and food).

Other leading export countries in 2019 included:

Sudan reported imports totaling 9% of GDP in 2019. Since its exports were only 7.7% of GDP, the nation's net exports were -1.3% as a percentage of GDP. Sudan thus had a small trade imbalance.

For a country to be a net exporter, foremost it must have products that overseas buyers desire and the capacity to produce those goods relatively low enough cost that it makes sense for foreign consumers to import them as opposed to buy them domestically. A country will export when it has a comparative advantage in a product, or an ability to produce a particular good or service at a lower opportunity cost than its trading partners. Some countries will also enjoy an absolute advantage in certain products, especially rare raw materials or natural resources that are not readily found elsewhere. These will be highly demanded for export.

A country's currency exchange rate will also play an important role. If a currency loses value relative to other national monies, producers can produce and sell those goods abroad for relatively cheaper (and the reverse is true if the currency value rises). Because of this, a country's government or central bank of an exporting country may employ monetary policy tools if the currency starts to rise in global markets.

What is meant by net exports?

How do you calculate net exports?

For a given year, net exports = total exports - total imports

What are examples of net exports?

Why are net exports included in GDP?

Gross domestic product (GDP) is a measure of an economy's size that accounts for the value of all goods produced within a nation's borders over the course of a year. Exports represent domestic production that is sold to other countries. That is why it is included in GDP.

Is the U.S. a next exporter?

No, the U.S. is historically a net importer and runs a standing trade deficit.

Take the Next Step to Invest
×
The offers that appear in this table are from partnerships from which Investopedia receives compensation. This compensation may impact how and where listings appear. Investopedia does not include all offers available in the marketplace.
Service
Name
Description
Related Terms
What Are Exports? Definition, Benefits, and Examples
Exports are those products or services that are made in one country but purchased and consumed in another country.
more
Balance of Trade (BOT): Definition, Calculation, and Examples
Balance of trade is the difference between the value of a country's exports and the value of its imports; it is the largest component of a country's balance of payments.
more
Net Importer
A net importer is an entity, usually a country, that buys more from other entities (countries) than it sells to them over a given period of time.
more
Current Account Surplus Definition & Countries That Have It
A current account surplus is a positive current account balance, indicating that a nation is a net lender to the rest of the world.
more
Gross Domestic Product (GDP): Formula and How to Use It
Gross domestic product is the monetary value of all finished goods and services made within a country during a specific period.
more
What Is Trade Surplus? How to Calculate and Countries With It
A trade surplus is an economic measure of a positive balance of trade, where a country's exports exceed its imports.
more
Partner Links
Related Articles

What Is GDP and Why Is It So Important to Economists and Investors? 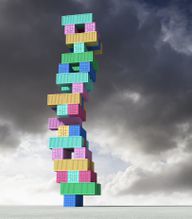 The Top 25 Economies in the World

GDP vs. GNP: What's the Difference?