What Is an Obligor?

An obligor, also known as a debtor, is a person or entity who is legally or contractually obliged to provide a benefit or payment to another. In a financial context, the term "obligor" refers to a bond issuer who is contractually bound to make all principal repayments and interest payments on outstanding debt. The recipient of the benefit or payment is known as the obligee.

If a covenant is breached by an obligor, the bond may become invalid and require immediate repayment, or it can sometimes be converted to equity ownership.

An obligor is a person who is legally bound to another. Debt holders are the most common types of obligors. However, in addition to the required repayment of interest and principal, many holders of corporate debt are also contractually required to meet other requirements. For a bondholder, these are called covenants and are outlined in the initial bond issue between the obligor and obligee.

Since these bond issues are contractual obligations, obligors may have very little leeway in terms of deferring principal repayments, interest payments or circumventing covenants. Any delay in payment or non-payment of interest could be interpreted as a default for the bond issuer, an event that can have massive repercussions and long-term ramifications for the continuing viability of the business. As a result, most bond obligors take their debt obligations very seriously. Defaults by overleveraged obligors do occur from time to time.

Obligor in a Personal Setting

An obligor is not required to be a bondholder or a holder of some other form of debt. Someone can become an obligor in their personal life, too. In family law, there are certain cases when a court order is handed down—in a divorce settlement, for example—that requires one of the parents to pay child support to the other parent. If a working spouse is told by the courts to pay the non-working spouse $500 a month, the monthly payment will make them an obligor. In situations like this, if there are changes to an obligor's financial status or income, they may petition the court to reduce their monthly obligation.

Otherwise, even if the obligor loses their job, the payments remain due and cannot be discharged in bankruptcy like other civil judgments. If an obligor falls behind on court-ordered payments, such as child support, it can lead to problems, such as wage garnishment, loss of driver's licenses, and other problems. It is important that an obligor parent pay what is owed, and make an effort to change child support amounts when there is a change in income of either parent.

Related Terms
Quasi Contract
A quasi contract is court-created legal agreement between two parties who did not have a previous obligation to each other.
more
Stipulated Judgment
A Stipulated Judgment is a court decision ordering a debtor to pay back a debt according to an agreed schedule.
more
Bond Violation
A bond violation is a breach of the terms of a surety agreement where one party causes damage to the other.
more
Bankruptcy Explained: Types and How It Works
Bankruptcy is a legal proceeding for people or businesses that are unable to repay their outstanding debts.
more
What Is a Covenant? Definition, Meaning, Types, and Examples
A covenant is a commitment in a bond or other formal debt agreement that certain activities will or will not be undertaken.
more
What are Financial Securities? Examples, Types, Regulation, and Importance
A security is a fungible, negotiable financial instrument that represents some type of financial value, usually in the form of a stock, bond, or option.
more
Partner Links
Related Articles 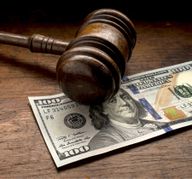 Top Financial Mistakes to Avoid in a Divorce Settlement

What Is a QDRO?