What Is a Strong Buy?

A strong buy is a recommendation given by analysts for a stock that is expected to dramatically outperform the average market return and/or the return of comparable stocks in the same sector or industry. It represents an analyst's emphatic endorsement of a stock.

A strong buy can be contrasted with a strong sell.

A stock with a "strong buy" rating is expected to significantly outperform the markets over the near term. A strong buy is the strongest recommendation that an analyst can give to purchase a stock. As with any type of analyst rating, the rating is only relevant until a material event occurs that results in the analyst changing his or her outlook regarding the company. A 'strong buy' means the analyst believes the stock's underlying company is or will soon be experiencing positive financial performance and/or favorable market conditions.

A strong buy rating indicates an analyst has reason to believe the stock will trade drastically higher over the coming months. What exactly those reasons are can vary considerably, but in general, the analyst usually predicts the potential gain in anticipation of some sort of positive event, such as a return to profitability or the launch of a new product. A strong buy writing is usually accompanied by an extremely optimistic price target on the stock, such as a 30% to 50% gain over the coming 12 months.

The strong buy rating isn't nearly as highly regarded as it was only a few years ago. As such, many investment banks currently prefer to stick with the less emotive buy rating.

There is no universal ranking system, so it's important to understand a firm's rating scale in order to know what it means by the terms it uses.

Take the Next Step to Invest
×
The offers that appear in this table are from partnerships from which Investopedia receives compensation. This compensation may impact how and where listings appear. Investopedia does not include all offers available in the marketplace.
Service
Name
Description
Related Terms
Mr. Market Definition
Mr. Market is an imaginary investor devised by Benjamin Graham and used as an allegory in his 1949 book "The Intelligent Investor."
more
Investing Explained: Types of Investments and How To Get Started
Investing is allocating resources, usually money, with the expectation of earning an income or profit. Learn how to get started investing with our guide.
more
Benjamin Graham
Benjamin Graham was an influential investor who is regarded as the father of value investing.
more
Value Investing Definition, How It Works, Strategies, Risks
Value investors like Warren Buffett select undervalued stocks trading at less than their intrinsic book value that have long-term potential.
more
Peer Perform
Peer perform is an investment rating that sell-side analysts use when a given security provides returns consistent with those of other companies in its sector.
more
Overweight (Investing): Definition, Recommendations, Pros & Cons
An overweight investment is an asset or industry sector that comprises a higher-than-normal percentage of a portfolio or an index.
more
Partner Links
Related Articles

Where Investors Put Their Money in a Bear Market 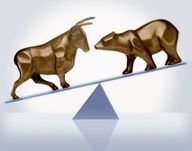 3 Reasons Not to Sell After a Market Downturn

Zoom Q1 FY2023 Earnings Report Preview: What to Look For

Sony Could Rally 30% on Record Earnings

Why Put Money Into a Volatile Stock Market?
Dialog Heading