Turnover is an accounting concept that calculates how quickly a business conducts its operations. Most often, turnover is used to understand how quickly a company collects cash from accounts receivable or how fast the company sells its inventory.

Common forms of turnover include accounts receivable turnover, inventory turnover, portfolio turnover, and working capital turnover. Companies can better assess the efficiency of their operations through looking at a range of these ratios, often with the goal of maximizing turnover.

In the investment industry, turnover is defined as the percentage of a portfolio that is sold in a particular month or year. A quick turnover rate generates more commissions for trades placed by a broker.

Overall turnover is a synonym for a company’s total revenues. It is commonly used in Europe and Asia.

Two of the largest assets owned by a business are accounts receivable and inventory. Both of these accounts require a large cash investment, and it is important to measure how quickly a business collects cash.

Turnover ratios calculate how quickly a business collects cash from its accounts receivable and inventory investments. These ratios are used by fundamental analysts and investors to determine if a company is deemed a good investment.

What Is Accounts Receivable Turnover?

Similarly, accounts payable turnover (sales divided by average payables) is a short-term liquidity measure that measures the rate at which a company pays back its suppliers and vendors.

What Is Inventory Turnover?

The inventory turnover formula, which is stated as the cost of goods sold (COGS) divided by average inventory, is similar to the accounts receivable formula.

When you sell inventory, the balance is moved to the cost of sales, which is an expense account. The goal as a business owner is to maximize the amount of inventory sold while minimizing the inventory that is kept on hand. As an example, if the cost of sales for the month totals $400,000 and you carry $100,000 in inventory, the turnover rate is four, which indicates that a company sells its entire inventory four times every year.

What Is Portfolio Turnover?

Turnover is a term that is also used for investments. Assume that a mutual fund has $100 million in assets under management, and the portfolio manager sells $20 million in securities during the year. The rate of turnover is $20 million divided by $100 million, or 20%. A 20% portfolio turnover ratio could be interpreted to mean that the value of the trades represented one-fifth of the assets in the fund.

Why can mutual funds with high turnover rates be detrimental?

Funds with high turnover ratios might incur greater transaction costs (such as trading fees and commissions) and generate short-term capital gains, which are taxable at an investor’s ordinary income rate.

What is asset turnover?

The asset turnover ratio is a measure of how well a company generates revenue from its assets during the year.

Investors use the asset turnover ratio to compare similar companies in the same sector or group.

What is working capital turnover?

Working capital turnover measures how effective a business is at generating sales for every dollar of working capital put to use. Working capital represents the difference between a company’s current assets and current liabilities.

What is an example of turnover?

What is the difference between turnover and profit?

Profit refers to a company’s total revenues minus its expenses. By contrast, turnover can refer to how quickly a company either has sold its inventory or is collecting payments compared with sales over a specific time period. Generally speaking, turnover looks at the speed and efficiency of a company’s operations.

Article Sources
Investopedia requires writers to use primary sources to support their work. These include white papers, government data, original reporting, and interviews with industry experts. We also reference original research from other reputable publishers where appropriate. You can learn more about the standards we follow in producing accurate, unbiased content in our editorial policy.
Related Terms
Receivables Turnover Ratio Defined: Formula, Importance, Examples, Limitations
The accounts receivable turnover ratio measures the number of times a company collects its average accounts receivable balance in a specific time period.
more
Average Collection Period Formula, How It Works, Example
The average collection period is the amount of time it takes for a business to receive payments owed by its clients in terms of accounts receivable.
more
Understanding Overall Turnover
Overall turnover is a synonym for a company’s total revenues. It is a term that is most commonly used in Europe and Asia.
more
Days Sales of Inventory (DSI): Definition, Formula, Importance
The days sales of inventory (DSI) gives investors an idea of how long it takes a company to turn its inventory into sales.
more
Annual Turnover: Definition, Formula for Calculation, and Example
Annual turnover is the percentage rate at which a mutual fund or exchange-traded fund replaces its investment holdings on an annual basis.
more
Short-Term Assets
Short-term assets refer to those that are held for a short period of time or assets expected to be converted into cash in the next year.
more
Partner Links
Related Articles

What Do Efficiency Ratios Measure?

How to Determine the Efficiency of a Company's Working Capital Management 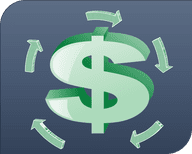 Which Industries Have the Highest Inventory Turnover?