What Is the XOF (West African CFA Franc)?

The West African CFA franc (XOF) is the shared currency of eight independent states in West Africa. The XOF uses both coins and banknotes, with the franc subdivided into 100 centimes. The Central Bank of West African States, located in Dakar, Senegal, regulates the currency. The members that use the West African CFA France consist of the West African Economic and Monetary Union and include Benin, Burkina Faso, Ivory Coast, Guinea-Bissau, Mali, Niger, Senegal, and Togo. Together, these countries have a spending power that exceeds over 78 billion dollars.

Because the members are joined together by their use of the CFA franc, they have created what is known as the CFA franc zone. The CFA franc zone is made up of the two independent unions of the West African Economic and Monetary Union and the Central Africa Economic and Monetary Community. The dual union helped cement the value and usability of the CFA franc, first by setting its equivalent to the French franc, which later became the euro. By aligning the values, the colonies were able to gain security and stability with the franc. In return, however, the French treasure required large deposits of their external reserves into their accounts, first at 65-percent and then later, lowered down to 50-percent.

Several countries belonging to the West African Economic and Monetary Union (UEMOA) were French colonies using the French West African franc, including the Ivory Coast, Dahomey, French Sudan, Mauritania, Niger, Senegal, Togo and Upper Volta. As those colonies gained independence, they continued to use the CFA France for their currency.

Mali, also known as French Sudan, was the only independent colony to create a national currency in 1961. However, by 1984, Mali returned to use the CFA franc, with an exchange of 1 CFA France to 2 Malian francs. The CFA pegs to the euro.

Creation of the CFA franc was in 1945, following the end of the Second World War. Previously, French colonies had their currencies pegged to the French franc. However, changes made by the signing of the Bretton Woods Agreement, ratified in 1945, pegged the French franc to the dollar, which devalued the French Franc. France created the new currency to avoid devaluing the money in its colonies.

The initial exchange rate in 1945 was 1 CFA franc to 1.70 French francs. In 1948, the rate changed to 1 CFA franc to 2 French francs after the devaluation of the French franc. This artificially high exchange rate for the CFA franc caused economic stagnation among the countries in the CFA franc zone in the 1980s and early 1990s. In consultation with France and the International Monetary Fund, the African monetary unions decided to devalue their currencies by 50 percent, which, along with other fiscal and monetary policy adjustments, generated GDP growth of 5 percent in the CFA franc zone between 1995 and 2000.

Take the Next Step to Invest
×
The offers that appear in this table are from partnerships from which Investopedia receives compensation. This compensation may impact how and where listings appear. Investopedia does not include all offers available in the marketplace.
Service
Name
Description
Related Terms
CFA Franc Definition
The CFA franc, backed by the French treasury, refers to both the Central African CFA franc and the West African CFA franc and is used by 14 countries.
more
XAF (Central African CFA Franc)
The XAF (Central African CFA Franc) is the official currency of six central African countries.
more
CFP Franc (XPF)
The CFP Franc (XPF) is the official currency of the French territories of the Pacific: New Caledonia, French Polynesia, Wallis, and Futuna.
more
Guinea Franc (GNF)
GNF, or the Guinea franc, is the currency of the Republic of Guinea.
more
Bank Of Central African States (BEAC)
The Bank Of Central African States oversees the monetary system and issues currency for the Economic and Monetary Community of Central Africa (CEMAC).
more
Mauritanian Ouguiya (MRO)
In currencies, MRO is the foreign exchange (FX) abbreviation which represents the Republic of Mauritanian ouguiya.
more
Partner Links
Related Articles

How to Choose a Forex Broker: What You Need to Know 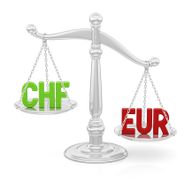 5 Ways to Invest in Currencies