Saudi Arabia’s state-owned oil company, Saudi Aramco, has valued its coming IPO as high as $2 trillion. But that valuation may end up being slashed by up to 40% when it goes public, according to a survey of 24 big money managers by Bloomberg. The poll showed that more than 40% of money managers put the company’s range at $1.2 trillion to $1.5 trillion, and another 25% value it drastically lower, at $1.1 trillion or less.

That’s less than the minimum figure of about $1.7 trillion that Crown Prince Mohammed Bin Salman is said to have indicated he's willing to accept. That's also well below the $2 trillion valuation the prince initially put on the company. Investors will learn the official price range on Sunday, according to Bloomberg.

The low valuations illustrate the risks facing the publicly listed shares of the IPO when they are put up for sale in early December. Many investors are skeptical and they outline a long list of risks in a story by The Wall Street Journal, as outlined below.

One of those risks concerns Aramco’s profitability in a world of volatile oil prices and a region of geopolitical tensions. The company recently disclosed a decline in net profit of 18% to $68 billion for the nine months that ended in September from the same period a year ago. Oil prices were higher last year and unlike this year, Aramco wasn’t the subject of drone attacks that wiped out about half of its daily crude production. While oil price volatility comes with the industry, the attacks raise the risk premium on those new shares.

If the Saudi government is strapped for cash, it could be tempted to dip a little deeper into the profits of its oil company. That wouldn’t be a completely unprecedented move for the government of an emerging-market economy to make, according to Uday Patnaik, head of emerging-market debt at U.K.-based asset manager Legal & General Investment Management Ltd. “Guess where you go if you need some tax money? You go to your quasi-sovereigns,” he told the Journal.

A similar risk faces Russia’s state-run gas giants Gazprom and Rosneft, which is why their shares trade at a discount to major publicly owned integrated oil-and-gas companies like Chevron (CVX) and BP Plc. (BP). Compared to Chevron’s dividend yield of 3.9%, Gazprom pays 7%, reflecting the risk that profits could easily be sifted into the state’s coffers. The high dividend yield paid by Gazprom suggests Aramco may have to offer something similar in order to attract investors.

Currently, Aramco pays out $75 billion in annual dividends. At the company’s desired $2 trillion valuation, that’s a dividend yield of just 3.75%. Even at the company’s base valuation of around $1.7 trillion, the yield would be just 4.4%. At the $1.5 trillion that some investors think is more realistic, the yield would be 5%. Aramco executives have signalled that the company may boost the initial dividend payout to $80 billion and could later elevate it to $100 billion, generating yields of 4% and 5% respectively.

But compared to the average 5.7% dividend yield offered by Western oil majors and the average 6.3% yield offered by other emerging oil majors, even 5% might not be enough to entice foreign investors. Persuading global investors to buy in will be necessary if the IPO is going to be viewed as credible. Aramco is banking on at least half of the issue being gobbled up by international investors. That might be a tad optimistic considering the shares are only being listed on Saudi Arabia’s local Tadawul stock exchange.

Of course, attracting domestic investors who will be looking to stay in good favor with Saudi Crown Prince Mohammed bin Salman should be less of a challenge. But because of these non-financial reasons for investing, an issue that goes entirely to domestic investors won’t be much of an indicator of how much the company is really worth. To obtain those global investors, the Saudi government may find itself having to drop its valuation, possibly even below its base case. 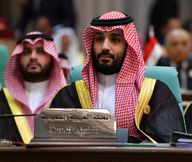 Saudi Aramco IPO may be Slashed Amid Attacks

The Bumpy Road to an Economic Recovery with Mohamed El-Erian

Oil Price Analysis: The Impact of Supply and Demand

The Top 25 Economies in the World

Top Oil Tanker Stocks for Q4 2022
Partner Links
Related Terms
What Is Saudi Aramco? Its History, IPO, and Financials
The oil giant is the world's most profitable company, eclipsing even tech giants like Apple and Alphabet.
more
SAMA Foreign Holdings (Saudi Arabia)
SAMA Foreign Holdings is a sovereign wealth fund (SWF) controlled by the Saudi Arabian Monetary Agency (SAMA).
more
Organization of the Petroleum Exporting Countries (OPEC)
OPEC or the Organization of the Petroleum Exporting Countries consists of the major oil-exporting nations. Read about OPEC’s impact on oil supply and prices.
more
What Is Kuwaiti Currency? KWD (Kuwaiti Dinar) Defined and History
The Kuwaiti dinar (KWD) is the national currency of the State of Kuwait, a country located on the Persian Gulf.
more
Denationalization
Denationalization, also known as privatization, occurs when a national government sells an asset such as a large firm to private investors.
more
Initial Public Offering (IPO): What It Is and How It Works
An initial public offering (IPO) refers to the process of offering shares of a private corporation to the public in a new stock issuance.
more
Dialog Heading