Brexit is likely to be at the forefront of investors minds this week. In the next four days, British politicians will have their say on how and potentially when the U.K. leaves the European Union (EU).

By Friday, investors will find out whether Brexit will happen with or without an agreement in place by the March 29 exit date. There is also the possibility that the negotiation process gets stalled for a couple more months, potentially paving the way for another referendum.

The outcome of a series of votes promises to determine the fate of the world’s fifth largest economy, as well as the rest of the world and the global stock market. Here’s a breakdown of how this crunch week could pan out:

On Tuesday, Theresa May will have another shot at getting her Brexit deal accepted by the House of Commons. The Prime Minister was humiliated in January when her Withdrawal Agreement, put together after months of tense negotiations with the E.U., was rejected in Parliament by 230 votes, the greatest defeat of a sitting government in the U.K.'s democratic history. She has since been seeking to renegotiate on that deal with E.U. politicians, hopeful that they will offer enough compromises to satisfy demands back home.

By Monday morning, just one day before the vote, Downing Street admitted that talks remain deadlocked. Negotiations continued over the weekend, although both parties are reportedly still nowhere nearer to agreeing how to prevent a hard border between Northern Ireland, which is part of the U.K., and the Republic of Ireland, which is part of the E.U. British politicians have been clear that they will reject May’s deal once again if this contentious issue isn’t resolved.

At present, May’s current deal is almost identical to the one that was rebuffed back in January. The Sunday Times predicted that it, too, will be defeated by a 230-vote margin, unless a substantial breakthrough occurs soon.

Vote 2: Leave Without a Deal?

If May’s revised Withdrawal Agreement is voted down, on Wednesday Parliament will be asked to decide whether the U.K. should give up negotiations and leave without a deal. A small group of British politicians are believed to favor this outcome, even though economists warn that it could lead to an economic recession both in Britain and potentially the rest of the world.

Supporters of a “hard Brexit” want the freedom to set up their own trade deals and rules. However, economists warn that leaving the customs union and using less favorable World Trade Organization rules before independent trade agreements are drawn up could destroy its economy, pushing up the cost of imported goods and squeezing consumer spending.

Lawmakers from the country’s political parties have also cautioned that the higher trade costs of a no-deal scenario must be averted at all costs. Those warnings should prevent the small group of politicians campaigning for a hard Brexit from getting their way.

If, as expected, May’s proposal and a no-deal Brexit are rejected, politicians will get a third vote on Thursday. They will be asked whether Brexit should be delayed for a “short, limited” time, believed to be about two to three months.

The Article 50 negotiating period is due to automatically expire March 29. The European Council must give its approval to extend this date and would likely do so if asked to avoid the damaging impact of the U.K. leaving the E.U. without a deal.

Should the voting process reach this stage, another rejection is unlikely. If politicians didn’t want a no-deal Brexit, voting against delaying the process just days before the negotiation timeline is set to expire would make little sense, other than perhaps forcing May to resign.

Skeptics have questioned whether a couple more months would be sufficient, given that little progress on negotiations has been made since Article 50 was triggered nearly two years. If May survives after her second proposal is rejected, expect her to use this extra time to continue working on getting her deal over the line.

Meanwhile, opposing politicians will put forward their own proposals once again. Center-left Labor, the country’s biggest opposition party, is fighting to keep the U.K. in the E.U. customs union. Labor MPs have also called for the British public to have its say in another vote.

If Parliament rejects a no-deal Brexit and fails to quickly find an alternative solution that suits all parties, a second referendum may be the only course of action left. If the public votes yes to Brexit again, it’s back to square one. Alternatively, should the British electorate have a change of heart, Brexit would be scrapped indefinitely.

Analysts have been warning that global stock markets have a lot riding on how, when and if Britain leaves the E.U. and caution that investors have yet to price these various risks into share prices. Over the next week, a number of U.S. stocks could see big swings depending on how votes play out.

What Is in the Brexit Deal? 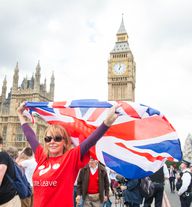 10 US Stocks Swayed by Brexit
Partner Links
Related Terms
Brexit Meaning and Impact: The Truth About the UK Leaving the EU
Brexit refers to the U.K.'s withdrawal from the European Union after voting to do so in a June 2016 referendum.
more
Article 50
Article 50 is the clause of the European Union's Lisbon Treaty that outlines how to leave the EU.
more
What Is Calexit? About Proposals for California's Seccession
Calexit refers to the secession of California from the United States, after which it would become an independent country.
more
Collective Bargaining
Collective bargaining is the process of negotiating terms of employment between an employer and a group of workers.
more
European Economic and Monetary Union (EMU)
The European Economic and Monetary Union (EMU) refers to all of the countries that have adopted a free trade an monetary agreement in the Eurozone.
more
European Union (EU): What It Is, Countries, History, Purpose
The European Union (EU) is a political and economic union of 27 countries. It promotes democratic values and is a powerful trade bloc.
more