Apple CEO Tim Cook will receive a 40% cut to his target compensation in 2023 following the company’s latest shareholder vote.

The decision was made after last year’s shareholder vote, in which just 64% of Apple shareholders voted to approve Cook’s compensation package, significantly less than the 95% who approved it in fiscal year 2020.

The change in Cook’s compensation package will apply solely to his stock awards, which in recent years have made up more than half of his total pay as Apple’s stock price and market cap have surged. In the 2023 fiscal year, Cook will earn $40 million in equity awards, down from $75 million in 2022. The equity award mix, which allocates compensation based on stock performance and time, will be allocated 75-25 in favor of performance, after being split evenly in 2022.

Since Cook took the helm as CEO in August of 2011, after the passing of Apple founder and then-CEO Steve Jobs, Apple shares (AAPL) have appreciated 1,212% after including dividends, compared to a 290% return for the S&P 500.

Apple shares are relatively unchanged in Friday trading. They are up nearly 7% since the beginning of the year. 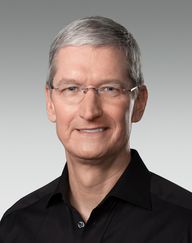 Explaining the Trump Tax Reform Plan
Partner Links
Related Terms
Daniel P. Amos
Daniel P. Amos is the chair and CEO of insurance company Aflac.
more
Icahn Lift
The Icahn Lift is the name given to the rise in stock price that occurs when investor Carl Icahn begins to purchase shares in a company.
more
Berkshire Hathaway: What It Is, Market Cap, and Who Owns It
Berkshire Hathaway is a holding company for a multitude of businesses run by chair and CEO Warren Buffett.
more
American Rescue Plan (Biden’s $1.9 Trillion Stimulus Package)
President Joseph R. Biden signed the American Rescue Plan, a $1.9 trillion stimulus package, into law on March 11, 2021, after Congress passed it.
more
What Was Enron? What Happened and Who Was Responsible
Enron was a U.S. energy company that perpetrated one of the biggest accounting frauds in history. Read about Enron’s CEO and the company’s demise.
more
Canada Pension Plan (CPP) Definition
The CPP or Canada Pension Plan is one of three levels of Canada's retirement income system responsible for paying retirement or disability benefits.
more