The Toyota Rewards Visa is aimed at promoting loyalty to Toyota dealerships. There is no annual fee, and rewards earned with this card can be used for service, parts, and even vehicle purchases. There is a bonus of 5,000 points when you spend $500 outside of Toyota dealerships in the first 90 days. 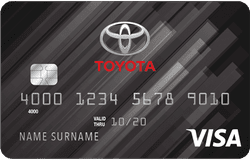 5,000 bonus points for spending $500 outside Toyota dealerships within first 90 days.

Recommended Credit Score Our recommended ranges are based off of the FICO® Score 8 credit-scoring model. Credit score is one of the many factors lenders review in considering your application.
350 579
580 669
670 739
740 799
800 850
Poor - Excellent
how this card stacks up
When compared among all rewards cards in our database:
Rewards
Benefits
Low Fees
Security/Customer Experience
Low Interest
worst best
Read our full methodology.

For the most part, this card is designed for people who want to earn rewards that they can use at a Toyota dealership, or for those who spend a fair amount of money there.

As a cash back card, the Toyota Rewards Visa is only mediocre, since there’s no guarantee that the statement credit will have the same redemption value as redeeming for services and products at a Toyota dealership. For those who want a tiered cash back rewards card, the Amex Blue Cash Everyday card, with its 3% back at U.S. supermarkets (up to $6,000 per year) and 2% back on gas at U.S. gas stations, and 1% on all other purchases, might be a better choice.

Rewards can be redeemed at participating Toyota dealerships for a value of $0.01 a point. It’s possible to use points to pay for service, parts, and even toward a vehicle purchase.

Other redemption options include statement credit, gift cards, merchandise, and travel. However, there are a few hoops to jump through, and redemption rates are set by the parties that administer the separate programs.

For example, you can request a statement credit from the issuing bank, but the denominations are listed by the bank, and you’re limited as to which you can choose. Travel fulfillment is through Montrose, and a third party called Hinda administers the program for merchandise and gift cards.

All of these redemption options have their own processes and redemption rates, which can make it difficult to actually redeem points for anything other than Toyota purchases or a statement credit.

The Toyota Rewards Visa doesn’t have a points transfer program.

The best option for maximizing rewards is to use them at a Toyota dealership, after taking advantage of the higher rewards earnings tiers in some areas.

In 2018, the average consumer spent $3,226 on entertainment and $3,459 on dining out. These spending categories earn 2 points per dollar with the Toyota Rewards Visa, resulting in a potential of 13,370 points in those categories alone. When redeemed at a Toyota dealership, 13,370 points would be worth $133.70, which could potentially pay for at least two oil changes a year, depending on what your dealer charges.

To maximize the rewards you earn, you'd want to put all your additional spending at the Toyota dealership on your card and collect the 5 points per dollar.

The Toyota Rewards Visa is issued by Comenity Capital Bank, which is not rated in J.D. Power’s 2019 U.S. Credit Card Satisfaction Study.

Comenity Capital Bank offers the Comenity app for Android or iOS. The app has a rating of 1.3 out of 5 on Google Play and 3.8 out of 5 in the Apple Store.

One of the most attractive security features with this card is called Lock It 'Til You Find It. It makes it possible to lock your card by signing into your account and clicking a button. If your card is lost or stolen, you can decline all new charges, while keeping your regular subscriptions and streaming services active. Once you find your card, you can unlock it.

Additionally, because it’s a Visa, the Toyota Rewards card comes with $0 liability on fraudulent purchases, as well as a way to receive emergency card replacement within one to three business days.

For people who expect to spend a fair amount of money at a Toyota dealership and would like to offset some of that with rewards or apply rewards toward the purchases of a new Toyota at participating dealerships, this can be a decent card.

However, the rewards are fairly mediocre, and trying to redeem them for anything other than Toyota parts, service, or vehicles, or a statement credit, can be difficult. For those who want more flexible cash back tiered rewards, a card like the Amex Blue Cash Everyday could be a better choice.

Apply Now
For Toyota Rewards Visa®
on Comenity Bank's Secured Site.
Compare This Card
See how this card compares to similar cards
CURRENT CARD
Toyota Rewards Visa®
overall rating
3.0
Apply Now
Recommended Credit Score Our recommended ranges are based off of the FICO® Score 8 credit-scoring model. Credit score is one of the many factors lenders review in considering your application.
350 579
580 669
670 739
740 799
800 850
Poor - Excellent
Investopedia Credit Card Rating Methodology
Investopedia is committed to delivering the best credit card recommendations in the industry. We’ll tell you when a card is good, we’ll tell you when a card is bad, and we’ll only call a card the best if we would recommend it to our friends or family members.
Overall Star Rating Explained
To rate credit cards we objectively assess, score and weight nearly 100 individual card features which roll up into five major feature sets: fees, interest, rewards, benefits and security/customer service. Here’s how we weighted those feature sets for the overall star rating of a card:
We have applied our proprietary rating methodology to every generally-accepted credit card in the U.S. domestic market to allow consumers to make fully informed choices. It’s important to note that for our overall score that we make a number of assumptions about how you would be using your credit card: