Escalating trade tensions between the U.S. and China as both countries have raised tariffs on each other’s goods has led to anxious anticipation of the upcoming G20 summit. U.S. President Donald Trump and Chinese President Xi Jinping are expected to meet to discuss the trade dispute splitting their countries apart sometime during the event, which is set to take place in Japan at the end of June.

While markets are currently pricing in a positive outcome that could help bridge the seemingly widening gap between the world’s two largest economies, it is possible that trade talks take a more worrisome path that leads to escalating tensions and drives the U.S. economy into recession, according to Morgan Stanley. The brokerage called the summit "a fork in the road for trade tensions."

The G20 summit presents the first opportunity that Trump and Xi will be able to meet since the U.S. fist announced raising tariffs from 10% to 25% on $200 billion worth of Chinese goods, a move to which China retaliated with its own set of tariffs on U.S. goods. Trump has made it clear he is ready to slap tariffs on the remaining $300 billion worth of Chinese goods if a trade agreement is not reached.

Morgan Stanley’s analysts envision three possible "paths"—in keeping with their fork-in-the-road analogy—that could emerge from the potential meeting: 1) working towards a deal, delaying key economic risks; 2) an uncertain pause that may at first soothe, but later disappoint, investors; and 3) escalation of trade tensions leading to clearer fundamental downsides.

If the two countries follow the first path, the analysts expect a resolution soon after the summit, with growth slowing from 2.75% in the first of 2019 to 1.9% in the second half. Following the second path, uncertainty will linger for 3-4 months while growth slows to 1.7% in the second half of the year if the Federal Reserve does not intervene with interest rate cuts or to 1.8% if rates are cut.

Taking the third path will lead to 25% tariffs being slapped on the remaining $300 billion of imports from China, with growth slowing to 1% in the second half of 2019 and -0.3% in 2020 despite rates being cut all the way to zero on fears of a looming recession.

While it is unlikely that any trade deal is settled at the summit, a meeting between the countries’ two leaders is expected to move in the direction of an eventual agreement. However, no official confirmation has yet come from China that the two leaders have actually agreed to meet.

Further, Trump has become renowned for simply walking away from talks that were not going in his favour, such as during his summit with Kim Jong Un in Vietnam and during negotiations with Democrats over border wall funding. If Trump walks again, it is likely the third path that the two countries will take at the G20’s ‘fork in the road’.

How a Trade War Could Push U.S. into a Recession and Bear Market 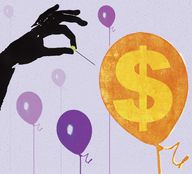 Why a Recession May Come Faster Than Investors Think

How Would a Trade War Affect You?
Partner Links
Related Terms
Trade War
A trade war arises when one country retaliates against another by raising import tariffs or placing other restrictions on the other country's imports.
more
Asian Infrastructure Investment Bank (AIIB)
The Asian Infrastructure Investment Bank (AIIB) is a Beijing-based multilateral development bank that finances infrastructure projects in Asia.
more
Tariff War Definition
A tariff war is an economic battle between countries where they levy additional tax on each others exports.
more
Association of Southeast Asian Nations (ASEAN)
ASEAN is an organization of 10 countries in southeast Asia that promote cultural, economic, and political development in the region.
more
What the World Trade Organization (WTO) Does
The World Trade Organization (WTO) is an international institution that oversees the rules governing global trade.
more
Global Corporate Minimum Tax: How Would It Work?
Implementation of a global corporate minimum tax involves complex political, legal, and economic decisions. Learn the issues and how it could work.
more