The United Business card charges $99 a year and offers 2 miles per dollar spent on United purchases as well as on office supplies, gas, and restaurants. The card offers a bonus of 75,000 miles, an annual 5,000-mile bonus if you also have a personal United credit card, and such other benefits as a free standard checked bag and priority boarding. 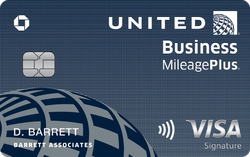 60,000 bonus miles after you spend $3,000 on purchases within the first 3 months of account opening.

Recommended Credit
Score Our recommended ranges are based off of the FICO® Score 8 credit-scoring model. Credit score is one of the many factors lenders review in considering your application.
350 579
580 669
670 739
740 799
800 850
Good - Excellent
how this card stacks up
When compared among all business cards in our database:
Rewards
Benefits
Low Fees
Security/Customer Experience
Low Interest
worst best
Read our full methodology.

This card is a great fit for businesses who have United fliers and want an inexpensive card that allows those employees to earn rewards and enjoy welcome, if modest, benefits when flying with the airline. The bonus of 75,000 miles, while requiring $5,000 in spending, delivers over a thousand dollars in value when the miles are used to buy flights. The United Business is especially well-suited to those who travel on the carrier at least every few months and who also own a personal United card. Making at least seven flight-related expenditures of $100 or more a year allows you to earn an annual $100 statement credit, which helps justify the card’s annual fee. And owning two United cards—one business, one personal—entitles you to 5,000 bonus miles, which are also worth about $100.

This card is also worth considering by businesses who frequently rent cars. When renting for business purposes with this card, you receive primary insurance coverage, a relatively unusual perk.

In contrast to the coverage on most credit cards, United pays the upfront cost of any liability you incur while at the wheel of a rental car. That spares the business from having to pony up for the bill until the rental company settles with the insurer of your cars at home, which typically covers damage to cars you rent.

After you qualify for the bonus, it may take six to eight weeks to post to your United Explorer Business card account. Your account must be active and not in default at the time of fulfillment to receive the bonus points

The same 2-miles-per-dollar-spent rate also applies to expenditures on transit and commuting, including taxicabs, mass transit, tolls, and ride share services, as well as purchases at restaurants, gas stations, and office supply stores. The card earns 1 mile per dollar spent on all other purchases.

Your United miles can be redeemed in many ways, but you usually get the highest value by redeeming miles for premium air travel. Using United miles for business and first class tickets, we estimate, may earn you up to two-and-a-half times what you’d make when redeeming them for economy air travel. The airline can impose blackout dates and limit award seat availability at any time.

If you prefer not to redeem miles for airfare, you can instead use them (typically at lower value per mile) to book hotels, cruises, and rental cars or to buy merchandise from Apple and other retailers, and to obtain gift cards or experiences. You can also choose to donate them to a charity.

If you have MileagePlus Premier Gold elite status or higher, you can sign up for RewardsPlus. This program allows you to transfer your United miles to Marriott Bonvoy points at a one mile to one point ratio.

Making the most of this card begins by ensuring you charge $5,000 to it within the first 3 months of membership. That entitles you to earn an extra 75,000 miles. That bonus is so valuable—at an estimated $1,642 when used for flights—that it’s probably worth diverting purchases from other cards you use in order to earn it.

Indeed, even after the bonus is earned, continue to put all qualifying United, restaurant, gas station, and office supply store purchases on this card, unless you have other cards that offer richer rewards in these spending categories. Once you’re ready to redeem miles, the most lucrative option is typically to use them for premium award flights. However good a value these are, though, they of course demand a far higher number of miles per flight than redemptions for economy award flights.

J.D. Power’s 2020 U.S. Small Business Credit Card Study awarded Chase, the issuer of this card, with a score of 832. That score is eight points below the industry average of 840.

You can access your account through the Chase mobile app or call 800-888-8756 to reach a customer service specialist 24/7.

If your card is lost or stolen, you can request a new one through Chase's mobile app. You can also temporarily lock your card through the app if you think you misplaced it.

The United Business card charges a $99 annual fee but it's waived during the first year. Also, a cash advance will cost you more than some competing cards at $15 or 5% of the amount of each transaction, whichever is greater

The United Business card offers significant value to travelers who fly United at least every few months. The travel credit for taking seven or more flights within a calendar year and of two complimentary United Club passes are together worth roughly double the card’s $99 annual fee. And the bonus of 75,000 miles for spending $5,000 within three months could alone justify the card’s cost for years to come, provided the miles were used to buy flights.

It's also an unusually good card with which to rent a car. That’s because for business rentals, it offers primary coverage. That is, United/Chase pay the cost of damage for you and then pursue your car-insurance company for reimbursement

Next Steps
For United℠ Business Card
on Chase's Secured Site.
Compare This Card
See how this card compares to similar cards
CURRENT CARD
United℠ Business Card
overall rating
3.7
Next Steps
Recommended Credit
Score Our recommended ranges are based off of the FICO® Score 8 credit-scoring model. Credit score is one of the many factors lenders review in considering your application.
350 579
580 669
670 739
740 799
800 850
Good - Excellent
Investopedia Credit Card Rating Methodology
Investopedia is committed to delivering the best credit card recommendations in the industry. We’ll tell you when a card is good, we’ll tell you when a card is bad, and we’ll only call a card the best if we would recommend it to our friends or family members.
Overall Star Rating Explained
To rate credit cards we objectively assess, score and weight nearly 100 individual card features which roll up into five major feature sets: fees, interest, rewards, benefits and security/customer service. Here’s how we weighted those feature sets for the overall star rating of a card:
We have applied our proprietary rating methodology to every generally-accepted credit card in the U.S. domestic market to allow consumers to make fully informed choices. It’s important to note that for our overall score that we make a number of assumptions about how you would be using your credit card: