The United Club Business card includes United Club airport-lounge membership, a bonus of 50,000 miles for spending $3,000 on purchases in the first three months, and United's Premier Access travel benefits. But with its $450 annual fee, the card aims at companies whose employees fly United frequently rather than occasionally. 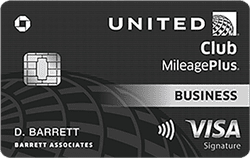 Recommended Credit
Score Our recommended ranges are based off of the FICO® Score 8 credit-scoring model. Credit score is one of the many factors lenders review in considering your application.
350 579
580 669
670 739
740 799
800 850
Excellent
how this card stacks up
When compared among all business cards in our database:
Rewards
Benefits
Low Fees
Security/Customer Experience
Low Interest
worst best
Read our full methodology.

This card is for frequent United fliers who are prepared to pay to enjoy its key benefit, the free use of United Club lounges in 45 airports around the world. It’s also suitable for those who want to skip having to earn status with United to enjoy such perks as free standard first and second checked bags and Premier Access travel services.

This card is also worth considering by businesses who frequently rent cars. When renting for business purposes with this card, you receive primary insurance coverage, a relatively unusual perk. In contrast to the coverage on most credit cards, United covers the cost of any damage you might incur while renting a car for business purposes. That spares the business owner or employee from having to deal with their personal auto insurance company in order to take care of any rental car damage, which is what is required with secondary rental car insurance coverage.

This card offers a bonus of 50,000 miles for spending $3,000 or more with the card within the first 3 months of opening an account. Based on our valuation of United miles at an average of 2.19 cents each, we estimate this bonus is worth $1,090 if used to redeem for United flights. You can expect to see the bonus miles post to your account within 6 to 8 weeks after qualifying.

The United Club Business card gives you the opportunity to earn 2 miles per dollar spent on the following purchases from United:

You also earn the 2-miles-per-dollar rate for purchases of event tickets and experiences from Inside Access from Chase. These purchases range, as examples, from $150 for tickets to Hadestown on Broadway to $7,000 for a three-day insider visit to Paris Fashion Week. All other purchases with the card earn 1.5 miles per dollar spent.

United’s MileagePlus miles never expire but, as with many such programs, the airline can limit the number of award seats and may enforce blackout dates.

You can redeem your miles in a number of ways. The most obvious choice (and generally the most lucrative, too) is to do so is to obtain flights with United or its Star Alliance partners. You can also use your miles to book upgrades.

If you prefer not to redeem miles for airfare, you can instead use them (usually at lower value) to book hotels, cruises, and rental cars or to buy merchandise from Apple and other retailers, and to obtain gift cards or experiences. You can also choose to donate them to a charity.

If you have MileagePlus Premier Gold elite status or higher, you can sign up for RewardsPlus. This program allows you to transfer your United miles to Marriott Bonvoy points at a one mile to one point ratio. Despite this, such transfers remain a poor value, since we value Marriott points at just 1.11 cents when redeemed for hotel stays, which is considerably less than of the estimated 2.19 cents value of United miles when used for flights.

The United Club Business card’s straightforward miles earning structure makes it easy to maximize your rewards. You only earn 2 miles per dollar spent on select United purchases, so make sure to put those purchases on your card. If you don’t have cards that provide a higher value for all other purchases, you can put those on your United Club Business card to earn additional miles.

To maximize the value of your rewards when redeeming miles, you’re often best off booking travel. Our research suggests miles earn you more when used for premium-cabin tickets—close to five times as much per mile in some cases. For example, we found a one-way ticket from New York to Frankfurt on Lufthansa (a United partner) in the Business Saver award category for 73,500 miles plus $5.60 in taxes and fees. Since a business class ticket on the same flight cost $7,101 including taxes and fees, the award redemption would provide an outstanding value per mile of approximately 9.7 cents.

But as the example shows, premium tickets also require redeeming a lot more miles. If you don’t value premium travel, you can still normally get a decent value by using your miles to book economy award flights.

The United Club Business card is issued by Chase, which scored an 833 in J.D. Power’s 2019 U.S. Small Business Credit Card Study. This score is below the industry average of 849.

Anytime you need help with your card, you can call 800-999-6977 to speak to a customer service specialist. You can also access your card via the Chase mobile app.

If your card is lost or stolen, you can get a replacement within 24 hours in the U.S. and Canada. Outside of these areas, one business day is required to receive a replacement. Otherwise, this card’s security features are standard for the industry.

With a notable exception of its $450 annual fee, the major fees for the United Club Business are generally in line with industry standards. The cash advance fee ($15 or 5% of the amount of each transaction, whichever is greater) is higher than some competing cards.

Unusually, the value proposition for the United Club Business is based less on its rewards, which are unremarkable, than its opportunity for access to the carrier’s 45 United Club lounges for a $450 annual card fee. Pricey as that fee is, it’s $100 to $200 less than the cost of purchasing membership in the club.If paying to enjoy free food, drinks, and Wi-Fi in exclusive lounges isn’t worth hundreds a year to you and your business, there’s not a lot to recommend the United Club Business card. The card does offer a number of other welcome United benefits, such as fast-track Premier Access for security and boarding. But some of these features are available in other ways at less cost, including with other United credit cards with lower annual fees—some of which even offer bigger bonuses.

If you don't care about United Club membership, strongly consider other United credit card options instead of this card.

Apply Now
For United Club Business Card
on Chase's Secured Site.
Compare This Card
See how this card compares to similar cards
CURRENT CARD
United Club Business Card
overall rating
2.7
Apply Now
Recommended Credit
Score Our recommended ranges are based off of the FICO® Score 8 credit-scoring model. Credit score is one of the many factors lenders review in considering your application.
350 579
580 669
670 739
740 799
800 850
Excellent
Investopedia Credit Card Rating Methodology
Investopedia is committed to delivering the best credit card recommendations in the industry. We’ll tell you when a card is good, we’ll tell you when a card is bad, and we’ll only call a card the best if we would recommend it to our friends or family members.
Overall Star Rating Explained
To rate credit cards we objectively assess, score and weight nearly 100 individual card features which roll up into five major feature sets: fees, interest, rewards, benefits and security/customer service. Here’s how we weighted those feature sets for the overall star rating of a card:
We have applied our proprietary rating methodology to every generally-accepted credit card in the U.S. domestic market to allow consumers to make fully informed choices. It’s important to note that for our overall score that we make a number of assumptions about how you would be using your credit card: