Alphabet Inc.’s (GOOGL) Waymo self-driving car unit has received a major blow after one Wall Street analyst cut his valuation of the business by $70 billion. On a larger scale, Morgan Stanley’s move reflects the much more cautious outlook for the commercial viability of self-driving cars, also called autonomous vehicles, compared to a year ago. These vehicles are being developed by industry players such as Tesla Inc. (TSLA), General Motors Co.’s (GM) Cruise Automation, and Uber Technologies Inc. (UBER), in hopes of leading the next generation of transportation.

“There have been a series of hurdles relating to the commercialization and advancement of autonomous driving technology,” wrote Morgan Stanley analyst Brian Nowak, per a detailed recent story in Bloomberg. “Most notably, we underestimated how long safety drivers are likely to be present within cars and the timing of the rollout of autonomous ridesharing services," added Nowak, who cut his valuation estimate by 40% for Waymo from $175 billion to $105 billion.

The first major incident that caused autonomous vehicle enthusiasts to take a step back was in 2018, when one of Uber’s self-driving vehicles killed a pedestrian. The event prompted a sharp public backlash and ignited regulatory investigations, serving as a warning sign for the nascent market.

The progress in making reliable self-driving cars has been slow. Waymo, for example, has a pilot program that's limited to Phoenix, where it has 1,000 users for its self-driving car service. Currently, for safety purposes, those vehicles typically have human drivers behind the wheel.

Morgan Stanley says that it underestimated the amount of time human safety drivers would need to remain present in the vehicles, and overestimated how quickly autonomous ridesharing services would be widely available. Another miscalculation by Morgan Stanley, per the note, was initially overstating the profitability of Waymo. Each driverless car unit costs more and stays in the red longer than expected. The pace of the development of autonomous logistics services also fell short of Morgan Stanley’s forecasts.

Morgan Stanley's note comes as Waymo, automakers and auto service companies already have made huge financial commitments to driverless cars. At the time of its IPO, for example, Uber already had spent over $1 billion on autonomous cars, per another Bloomberg report. Given the industry's progress to date, losses may continue to mount until widespread commercialization becomes a reality, which may be many years away.

Tesla's (TSLA) Autopilot Reported to Cause Another Crash 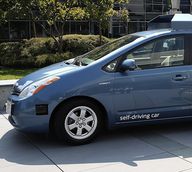 Apple Moves Forward With Plan for Self-Driving Vehicles
Partner Links
Related Terms
4 Factors of Production Explained With Examples
Factors of production are the inputs needed for the creation of a good or service, these include labor, entrepreneurship, and capital.
more
What is Sustainability? How Sustainabilities Work, Benefits, and Example
Sustainability focuses on meeting the needs of the present without compromising the ability of future generations to meet their needs.
more
Construction Spending
Construction spending tallies the amount of money spent toward new construction in a given month.
more
Venture Capital: What Is VC and How Does It Work?
Venture capital is money, technical, or managerial expertise provided by investors to startup firms with long-term growth potential.
more
Value Investing Definition, How It Works, Strategies, Risks
Value investors like Warren Buffett select undervalued stocks trading at less than their intrinsic book value that have long-term potential.
more
Congestion Pricing
Congestion pricing is a dynamic pricing strategy that attempts to regulate demand by increasing prices without increasing supply.
more