The Virgin Atlantic World Elite Mastercard has an annual fee of $90 a year and offers rewards of 3 miles per dollar spent with the airline, along with annual bonuses of up to 15,000 miles, plus a companion fare, for reaching certain spending thresholds. There’s also an easily earned one-time offer of 60,000 miles after spending $2,000 in the first three months of account opening. 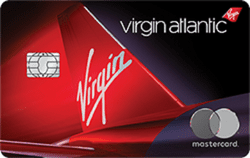 You receive a one-time offer of 60,000 Flying Club miles after spending $2,000 within the first 90 days of opening the account.

Every dollar you spend directly with Virgin Atlantic earns you 3 miles, for total rewards of about 4.8 cents per dollar, based on Investopedia’s valuation of Flying Club miles at 1.6 cents when used to buy Virgin Atlantic flights. All other purchases earn you 1.5 miles per dollar, for about 2.4 cents in value.While you earn only the regular 1.5-mile-per-dollar rate on purchases from Virgin Atlantic partners, you can still earn rich additional mileage rewards with these carriers, hotels, car-rental companies, and retailers. (These are Flying Club bonuses, which you can earn without necessarily using a Virgin Atlantic credit card.) While rewards vary, you can earn Flying Club miles for the distance traveled on Virgin Atlantic’s 11 carrier partners, who include Air France, KLM, SAS, Virgin Australia, and Air China. These earnings sometimes equal or rival the mileage earnings for travelling on Virgin Atlantic itself.Car rentals in the U.S. and Canada from Avis, Hertz, Alamo, and National earn you a bonus of 1,000 Flying Club miles, which translates to about $16 in value per rental. (Bonuses may differ for non-North American rentals and for other car-rental partners.)

Stays at Virgin Hotels, too, earn 1,000 Flying Club miles. And if you stay at Hilton, Marriott, Best Western, Hyatt, or seven other hotel chains, you can elect to earn Flying Club miles, rather than points in the loyalty programs for those chains.

Purchases with retail partners such Apple, Macy's, Saks Fifth Avenue, and Neiman Marcus can also earn Flying Club miles, often through one-time specials. For example, at the time of writing, it was possible to earn five miles for every dollar spent at Macy’s.You earn additional miles if you attain certain spending thresholds every year. Spending $15,000 within your card-anniversary year earns you 7,500 miles, and reaching $25,000 within the same time provides an additional 7,500-mile bonus. If you reach certain monthly spending thresholds, you can also receive additional bonuses of Virgin Atlantic Tier Points. Usually earned only by flying, and so difficult to value precisely, these rewards are needed to achieve elite status in the Flying Club. You earn 25 Tier Points for every $2,500 you spend, to a maximum of 50 Tier Points per month. You also earn them by buying flights on most of Virgin’s airline partners. Reaching Silver status, the first elite tier, requires earning 400 Tier Points within 12 months.

Points can be redeemed for reward flights, as well as for other experiences and benefits.

As with the points or miles earned with most cards, Flying Club miles generally yield the greatest value when used for Virgin Atlantic flights. You can choose to pay entirely in miles, or choose the “Miles Plus Money” option and pay partly in miles and partly in money. The amount you spend in cash still earns you the relevant miles and counts towards your spending to earn Tier Points.

Additionally, you can use your points to spend at partners, including other airlines, like Delta, and at hotels like Hilton and IHG. Virgin Group partners will also accept your miles for balloon flights, train trips, and other experiences. Virgin Galactic’s trips into space are even an option for spending your miles.

Given the top rewards rate of 3 miles per dollar on Virgin Atlantic spending, making the most of this card begins with favoring the carrier whenever you fly. All other spending on the card earns only half as many miles per dollar spent, but purchasing travel from Virgin Atlantic partners can earn you Flying Club miles from the rewards program itself. Flying with an airline partner, for instance, can allow you to earn rewards comparable to taking a Virgin Atlantic flight, including both Flying Club miles and the Tier Miles needed to qualify for elite status in the Flying Club. Renting from a car-rental partner can earn you a 1,000-mile bonus.

Also, plan to use the card enough through the year to meet the spending thresholds that unlock bonus Flying Club miles and Tier Miles. The 15,000 bonus miles you receive on qualifying purchases essentially boosts the card’s rewards rate for the year by a half-cent per dollar spent. That raises the value of rewards from Investopedia’s valuation of 1.6 cents per dollar spent to about 2.1 cents. Reaching the $25,000 mark, and so earning 15,000 miles in total, further increases the boost, by an additional 0.6 cents per mile. (At $25,000 in spending, you also then get the companion pass that could add hundreds more to the card’s value.)  You’re also rewarded if you invite people to share the card’s account with you. Adding an authorized user earns you 5,000 bonus miles, to a maximum of 5,000 bonus miles for adding two users.

Bank of America, which issues the Virgin Atlantic World Elite Mastercard received a score of 798 out 1,000 in J.D. Power’s 2019 U.S. Credit Card Satisfaction Study. The bank ranked in seventh place among 12 major credit card issuers. The score was a little below the national average of 806 points for all issuers.

Bank of America offers mobile apps for iOS and Android. These apps allow for account access in general, including the ability to keep track of credit card transactions. Scored out of a possible 5 by users, Bank of America’s mobile app has a score of 4.8 stars in the Apple App Store and 4.7 stars on Google Play.

As you might expect, the Virgin Atlantic World Elite Mastercard comes with $0 fraud liability. The issuer monitors purchases to identify unusual patterns and flag them. Additionally, the card features chip technology, making it more secure for users.

Another feature is overdraft protection for those with a Bank of America account. The card can be connected to the account and serve as protection against overdrawing from it.

While it’s highly rewarding, the Virgin Atlantic World Elite Mastercard might not be worth its fee for those who plan to use the card only occasionally. True, with its $90 annual fee, you could justify the expense, or close to it, merely from the rewards earned from a single high-season transatlantic return flight for two. (Assuming a fare of $900 each, you’d net 5,400 miles—at 3 miles per dollar spent with Virgin Atlantic—worth about $86 when used to buy further Virgin Atlantic flights.)But the Virgin Atlantic World Elite Mastercard offers few other benefits, even when flying on Virgin Atlantic. The card’s sweet spot kicks in only if you charge upwards of $1,250 a month, and so begin to unlock its multiple potential bonuses for high spending.

If you cannot—or would rather not—charge that much a month to the Virgin Atlantic World Elite Mastercard, you might be better off with a flexible travel rewards card. The Chase Sapphire Preferred, for example, has an annual fee of$95 and provides 2 points per dollar spent on travel and dining, and you can even transfer those points on a 1:1 basis to your account with the Virgin Atlantic Flying Club.

Apply Now
For Virgin Atlantic World Elite Mastercard®
on Bank of America's Secured Site.
Compare This Card
See how this card compares to similar cards
CURRENT CARD
Virgin Atlantic World Elite Mastercard®
overall rating
3.8
Apply Now
Recommended Credit Score Our recommended ranges are based off of the FICO® Score 8 credit-scoring model. Credit score is one of the many factors lenders review in considering your application.
350 579
580 669
670 739
740 799
800 850
Good - Excellent
Investopedia Credit Card Rating Methodology
Investopedia is committed to delivering the best credit card recommendations in the industry. We’ll tell you when a card is good, we’ll tell you when a card is bad, and we’ll only call a card the best if we would recommend it to our friends or family members.
Overall Star Rating Explained
To rate credit cards we objectively assess, score and weight nearly 100 individual card features which roll up into five major feature sets: fees, interest, rewards, benefits and security/customer service. Here’s how we weighted those feature sets for the overall star rating of a card:
We have applied our proprietary rating methodology to every generally-accepted credit card in the U.S. domestic market to allow consumers to make fully informed choices. It’s important to note that for our overall score that we make a number of assumptions about how you would be using your credit card: