Walmart probably earned $1.31 per share, compared with a profit of $1.45 a year earlier. Revenue is expected to rise by 4.8% to $147.2 billion, according to average estimates from Visible Alpha.

Demand for big-ticket and discretionary purchases sank in recent months as inflation boosts prices and customers rein in spending ahead of a potential recession. Supply chain issues and adjustments after the early stages of the pandemic also have led to excess inventory, which may force deep discounts heading into the holiday season. Walmart already cut its outlook for FY 2023.

A key measure of Walmart's performance is its total U.S. comparable sales growth, excluding fuel, which tends to be volatile due to gas price swings. The metric gauges the rate of growth generated by the company's existing stores and clubs in the U.S. as well as through e-commerce sales. Analysts expect total U.S. comparable sales growth excluding fuel to be 4.1%, less than half of the pace of a year ago.

Walmart shares cratered in May 2022 and have gradually recovered since then. They dropped 2% in the last year, compared with about a 15% decline for the S&P 500 Index (see chart below).

Walmart's profit surged early in the COVID-19 pandemic, but growth slowed throughout FY 2022. Both of the two most recent quarters brought declines in profit. Analysts expect a third straight decline for Q3 2023.

Walmart's revenue has grown at a generally modest pace in recent years. Analysts predict revenue climbed by 4.8% for the latest quarter, a slightly faster pace than a year ago.

Walmart's total U.S. comparable sales, also referred to as same-store sales, measures the sales performance of the company's U.S. stores and clubs that have been open during the previous 12 months. It includes e-commerce sales. The metric gauges a company's ability to generate additional revenue from established stores. If the bulk of a company's sales are being generated by established stores as opposed to new ones, it's a sign that the company's products haven't yet saturated the local market.

Coinbase Seen Swinging to Loss as Trading Dries Up

Walmart Q2 FY 2023 Earnings Report Preview: What to Look For 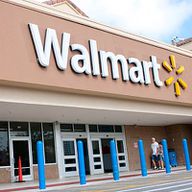 Walmart Q3 FY2022 Earnings Report Preview: What to Look For
Partner Links
Related Terms
Gross Merchandise Value (GMV): Definition, Formula, Pros and Cons, and Example
GMV or gross merchandise value is the total value of goods sold via customer-to-customer (C2C) or e-commerce platforms. Check out the pros and cons of GMV.
more
Fortune 1000
The Fortune 1000 is an annual list of the 1000 largest companies measured by revenue compiled by the American magazine Fortune.
more
Sales per Square Foot
Sales per square foot is a measure of the efficiency of a brick-and-mortar retail store.
more
Gross Domestic Product (GDP): Formula and How to Use It
Gross domestic product is the monetary value of all finished goods and services made within a country during a specific period.
more
Operating Profit: How to Calculate, What It Tells You, Example
Operating profit is the total earnings from a company's core business operations, excluding deductions of interest and tax.
more
Comparable Store Sales
Comparable store sales is a retail store's revenue in the most recent accounting period relative to the revenue from a similar period in the past.
more
Dialog Heading